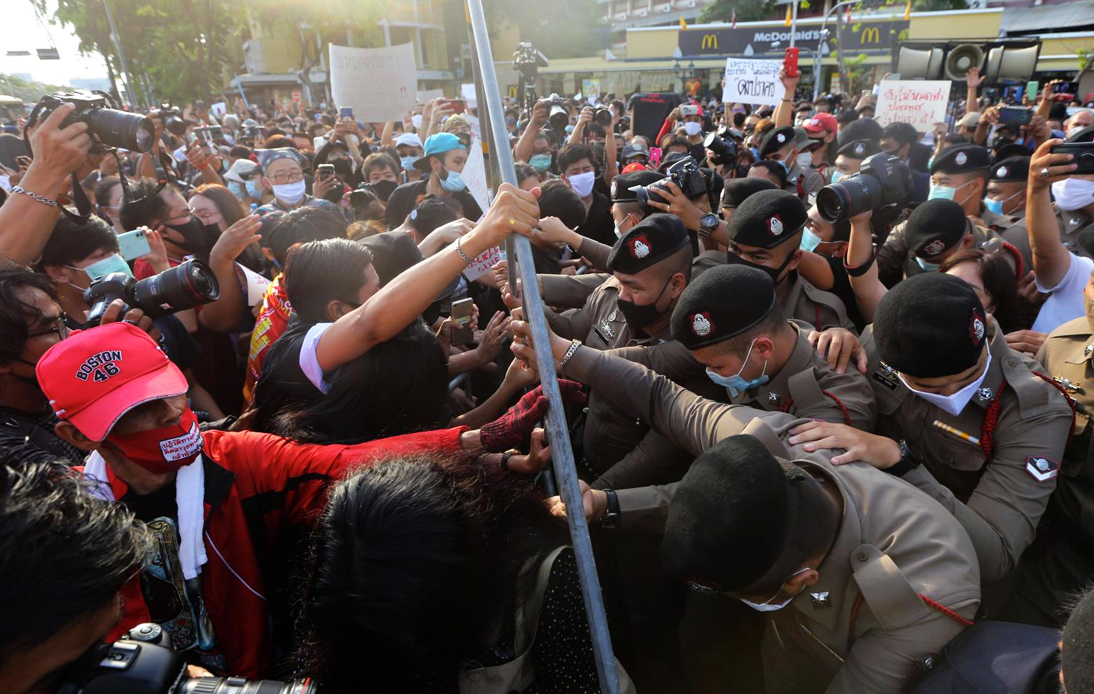 The protestors who participated in the weekend rally may face charges filed by police officials, though the authorities have maintained that the allegations of “men in black” threatening protestors on the day of the rally were untrue.

Yesterday, Samranrat station superintendent, Pol Col Itthipol Pongthorn, affirmed that the protestors did not seek permission to stage a demonstration at the venue.

“Three police stations will meet to discuss whether to press charges against the [protest leaders] for demonstrating in public places without a permit and/or violating the emergency decree,” he said, referring to Samranrat, Nang Loeng and Chana Songkhram stations, which have jurisdiction over the site.

He also rubbished the allegations by protest leaders that a few men wearing black clothes attempted to intimidate the protestors. He stated that the officers were present at the rally solely to provide security. However, some photographs floated by the media illustrate clashes between police and the protesters over barricades.

“No one was arrested and no one threatened the protesters,” he said.

The rally went on till midnight on Sunday at the Democracy Monument.

Yesterday, students and activists flocked to Tha Phae Gate to demand Prime Minister Prayut Chan-o-cha and his government and law-makers to rewrite the constitution. While some held placards stating the demands, others demonstrated a three-finger salute.

Concurrently, another rally unfolded in Ubon Ratchathani, with the same demands.

It is believed that both the rallies were organized by the “Free Youth” group. Since the imposition of lockdowns due to Coronavirus, no political gathering was held that matched the scale of the rally held at Bangkok’s Democracy Monument.

In a Facebook post, Jatuporn Prompan, chairman of the United Front for Democracy against Dictatorship, urged the protestors to be clearer with their demands since they have only spoken about the dissolution of the House and drafting a new constitution.

“If they underline only the three demands, the situation will go as normal,” he said on his Facebook page.

Spokesman of the Move Forward Party, Nattacha Boonchaiinsawat, dismissed the rumours that the party had a role to play in the protest conducted in Bangkok. Although he was present at the site of protest, he maintained that he was there to merely observe the rally and provide moral support to the protesters.