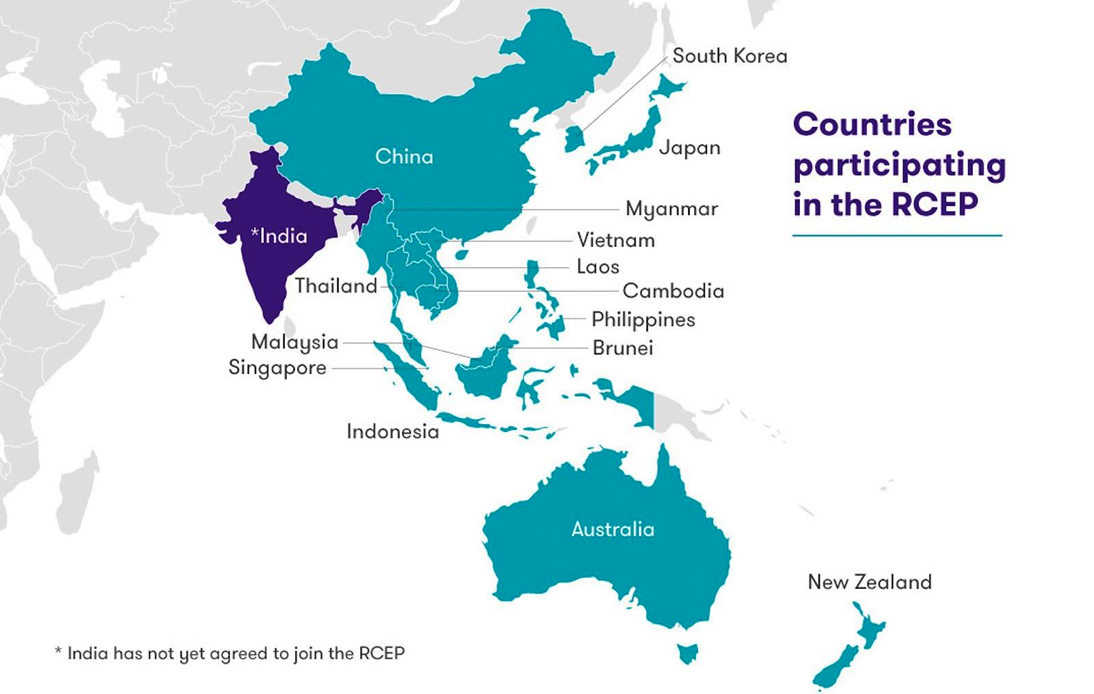 Fifteen countries in Asia and the Pacific have formed the largest trading bloc worldwide, covering almost a third of the global economy, the world’s population, and gross domestic product.

This union was called the Regional Comprehensive Economic Association (RCEP) and is made up of 10 countries from Southeast Asia, in addition to China, Japan, South Korea, New Zealand and Australia.

This pact is considered as an extension of China’s influence in the region.

The agreement excludes the United States, which withdrew from a rival Asia-Pacific trade pact in 2017.

Negotiations on the RCEP began in 2012, and the agreement was finally signed on Sunday, almost a decade later, on the final day of the 37th ASEAN Summit hosted virtually by Vietnam.

Vietnam’s Prime Minister Nguyen Xuan Phuc said: “I am delighted to say that after eight years of hard work, as of today, we have officially brought RCEP negotiations to a conclusion for signing.”

“The completion of negotiations is a strong message affirming Asean’s role in supporting the multilateral trade system,” he added.

Besides, he assured that the agreement would contribute to developing supply chains that have been interrupted due to the pandemic, as well as supporting economic recovery.

Chan Chun Sing, Singapore’s Minister of Trade and Industry, commented that a minimum of six ASEAN countries, together with three non-ASEAN partners, must ratify the RCEP for it to take effect.

He said Singapore plans to approve the deal in the coming months.

Asian countries are experiencing uneven recoveries from the coronavirus. Therefore, the countries’ leaders hope that this agreement will help drive the recovery from the pandemic.

In this regard, Chinese Prime Minister Li Keqiang said: “Under the current global circumstances, the fact the RCEP has been signed after eight years of negotiations bring a ray of light and hope amid the clouds.”

This trade pact covers 2.2 billion people with a combined GDP of $26.2 trillion. Its supporters said it would help bolster economies weakened by the pandemic by lowering tariffs, strengthening supply chains with common rules of origin, and codifying new e-commerce rules.

Singapore’s Ministry of Trade and Industry explained in a statement that some of the benefits of the agreement involve eliminating tariffs of at least 92% on goods traded between participating countries and stricter provisions to address non-tariff measures. Moreover, improvements are expected in areas such as protection of personal and consumer information online, transparency, and paperless trading.

It also includes simplified customs procedures, while at least 65% of the service sectors will be fully open with higher limits on foreign participation.