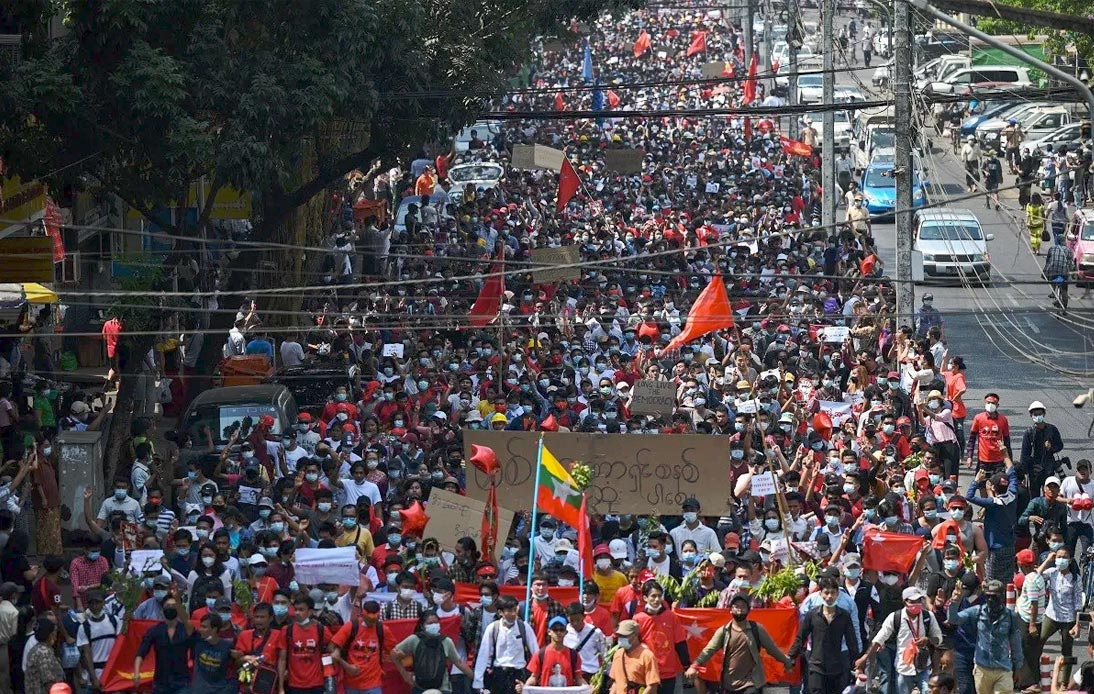 Tens of thousands of people demonstrated in all Myanmar cities on Sunday in opposition to the military coup on February 1.

The protesters also demanded Aung San Suu Kyi’s release, the president, and the rest of the Democratic leaders.

On the second consecutive day of demonstrations, crowds in Yangon wore T-red shirts, flags, and balloons to support the National League for Democracy (NLD) party. They chanted: “We don’t want military dictatorship! We want democracy!”

Such demonstrations have been the country’s largest protests since the Saffron Revolution of 2007 that helped establish democratic reforms.

Protesters took to the streets shortly after the junta ended a one-day Internet blackout that sparked demonstrations inside and outside the country. Days before, the military rulers ordered Internet service providers to block Facebook and other platforms for the sake of “stability.”

Police deployed, and a line of officers armed with riot shields formed barricades but did not attempt to stop the protests.

Some protesters gave the policemen flowers and bottles of water as a sign of peace. Thaw Zin, a 21-year-old protester, said: “We don’t want a dictatorship for the next generation. We will not finish this revolution until we make history. We will fight to the end.”

The junta, based in the capital Naypyitaw, has not commented on the matter.

State television media did not mention the protests. However, an internal note to UN staff estimated that around 1,000 people protested in the capital. In Yangon, the country’s largest city, more than 60,000 people rallied against the military government.

Protests were also reported in Mandalay and other towns and villages across the country, which has more than 53 million people.

Reports indicated that the demonstrations have been mostly peaceful. However, shots were heard in Myawaddy, in the southeast of the country. This happened after armed uniformed police officers charged a group of a couple of hundred protesters.

Some photos showed protesters injured by what appeared to be rubber bullet wounds.

According to Thomas Andrews, United Nations Special Rapporteur for Myanmar, more than 160 people have been arrested since the military coup.