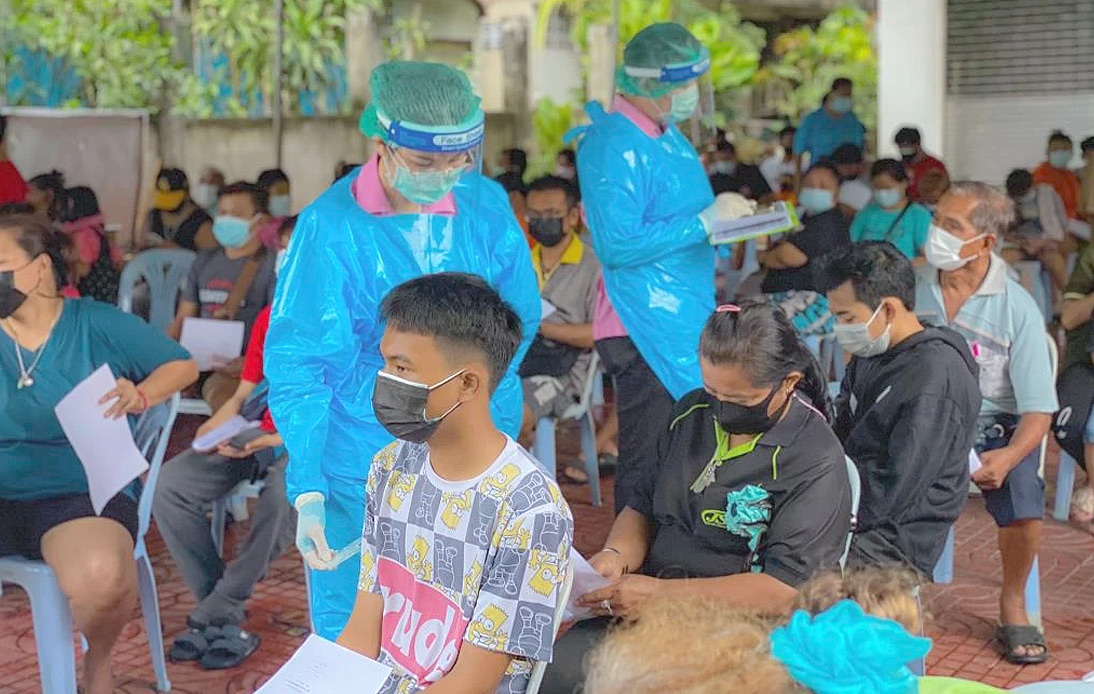 On Sunday, the Center for COVID-19 Situation Administration (CCSA) reported that 304 new coronavirus cases had been detected in or near slums in the Klong Toei district.

“Of these, 193 people are residents of the 12 slums in Klong Toei, while 111 patients resided in condominiums or apartments adjacent to these slums,” said the CCSA.

The community’s infection cluster has prompted the government to accelerate the vaccine rollout there amid growing concerns that it could overwhelm the healthcare system if not controlled in time. According to statistics from the Klong Toei Public Health Office, between 80,000 and 90,000 people reside in the slums.

“Residents of Klong Toei slums usually live together in a crowded space and mostly have careers that are not compatible with work-from-home arrangements,” said the Office.

“The government must establish a facility for quarantine and monitoring of symptoms of suspected patients in this area immediately to contain cluster cases from spreading even further,” it added.

Amid fears of widespread transmission, one sub-community has taken matters into its own hands.

It opened a makeshift isolation center where residents with COVID-19 can stay until authorities arrive to safely transfer them to a medical facility where they can receive treatment.

Although the average household in the slum is usually made up of five people, up to 13 people can live in a house, she added. Most of the residences only four walls with a door, and people usually sleep in the same room and share a single toilet.

Vaccination was set to begin at the Rama IV branch of the Tesco Lotus hypermarket and the Klong Toei Withaya school on Tuesday afternoon, Pol Gen Aswin said. Health officials expect to inoculate about 1,000 people by the end of the day and another 2,000-3,000 in the next few days.

Mass testing will also take place in the Klong Toei communities every day starting May 19.

Furthermore, a news source said that the Ministry of Defense’s acting permanent secretary Admiral Somprasong Ninsamai had sent a letter to the Port Authority of Thailand’s director-general, asking to use their Klong Toei Port’s warehouse for a new field hospital where residents could receive treatment.

The facility’s setting up will be in the hands of The Royal Thai Armed Force Headquarters.