“Ninja Thief” in Nonthaburi Is the Talk of the Internet 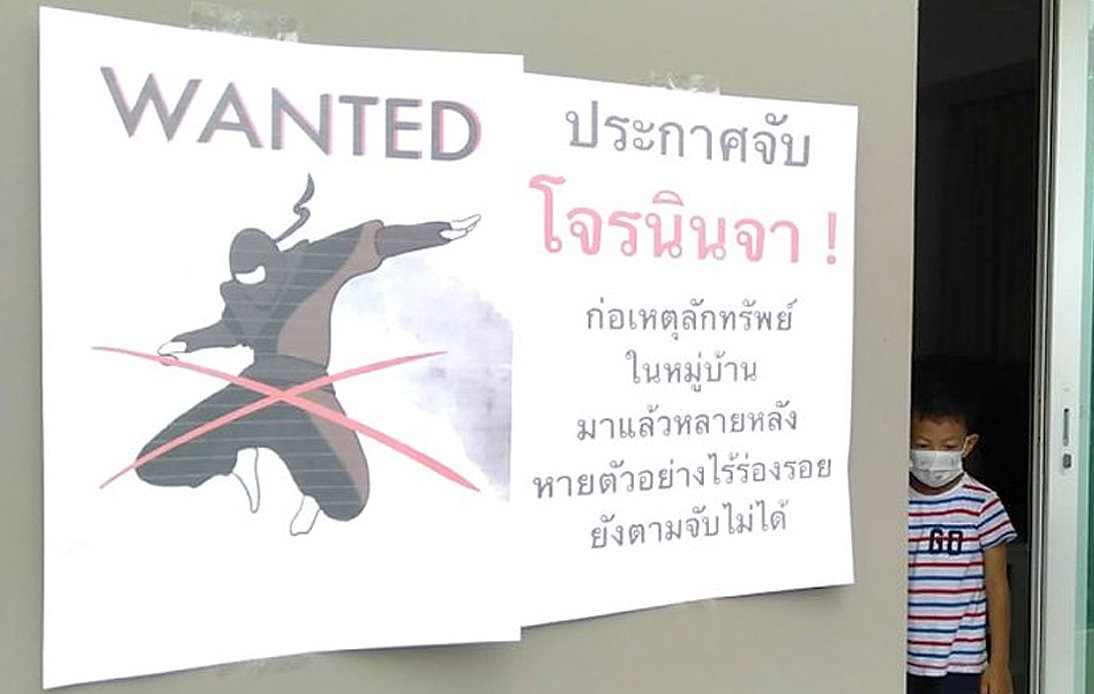 News about a “ninja thief” has invaded the internet in Thailand since the robber entered a few houses in Nonthaburi.

Residents of Nonthaburi, outside Bangkok, suffered the consequences from the robber who entered their houses through the top floor windows. After ten robberies, the people are beginning to warn others about the criminal.

Nonthaburi’s residents are putting up posters with the picture of a ninja.

Most of the residents in that area are wealthy, so they’ve lost valuable things. In one of the robberies, the stealthy thief took jewelry that costs 100,000 baht, as well as other valuable items.

Although the police are looking for a subject, they haven’t found the culprit yet.

Even though the events have happened in a wealthy neighborhood, the thief hasn’t been successful in every robbery. In the last event reported, the house owners said they didn’t have any expensive jewelry, so the robber left some poop in the toilet.

All the houses in the Nonthaburi neighborhood cost 5 million baht and more.

Because of that, they’ve done many things to increase their security system’s reach.

Since the homeowners pay thousands of baht in fees every year, they want to make sure their security system works and protects their things. However, so far, they haven’t been successful.

The neighborhood’s security system is merely a front gate plus a motorcycle-based strategy.

Apparently, this is not enough to find the robber and keep him out of people’s houses. The media reported that the police feels frustrated for not being able to find the robber. So far, the only thing they know is what the thief is taking.

Unlike other robbers, this thief isn’t interested in electrical devices or cellphones.

In reported crimes, the thief has only taken small items like jewelry and other valuable stuff. In one case, the homeowner didn’t even notice he missed 100,000 baht worth of jewelry until he checked a tiny box where he held it.

It seems like the ninja thief will continue to be anonymous for now.

Although the police and the community are working together to find the person that has harmed so many families, they haven’t made much progress.