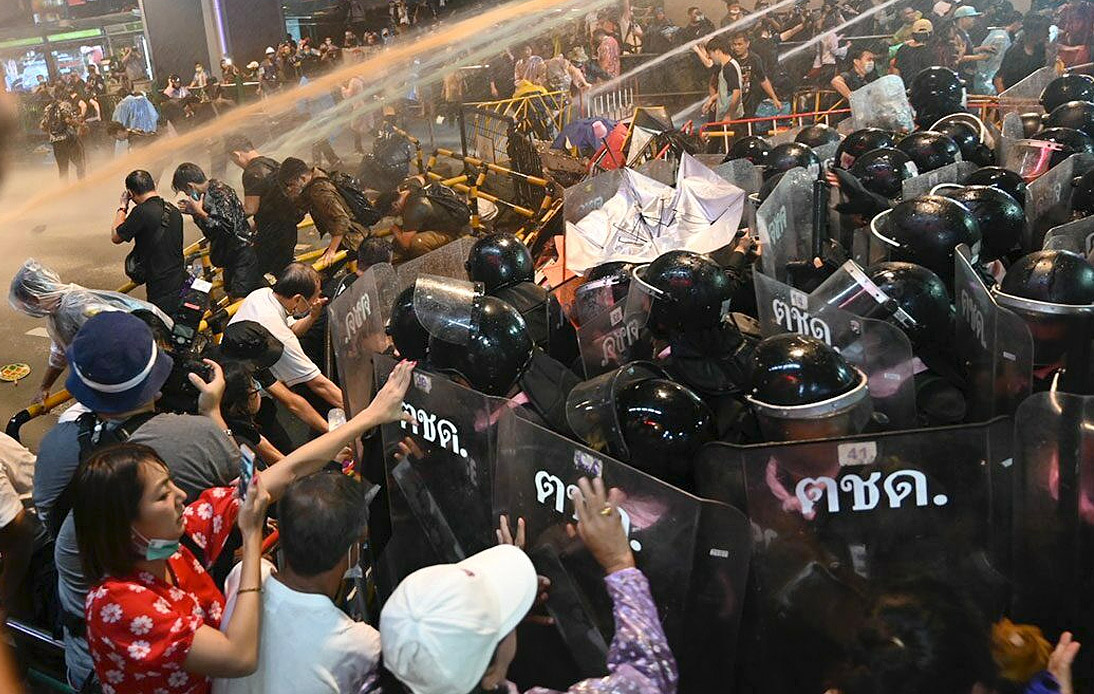 On Sunday, a peaceful pro-democracy rally in front of the 1st Infantry Regiment in Bangkok turned violent after police began firing rubber bullets, tear gas and water cannons at protesters.

The demonstrators, who were trying to approach the barracks, raised shell casings as proof that the police had fired rubber bullets at them.

It was also reported that the police decided to use water cannons to break up the demonstration when some protesters removed the shipping containers that the police had laid out to keep people away from the barracks on Vibhavadi Rangsit Road.

Riot police also fired tear gas at protesters, who threw bottles and other objects at them in response. Witnesses said things could be seen flying from both sides.

Initial reports did not indicate that there were injuries, but an ambulance was seen driving towards the Veterans General Hospital.

The protesters returned to the area outside the hospital near the barracks after the brief clash. The standoff continued outside the Veterans General Hospital, but tension eased after security guards created a human chain to maintain a safe distance between the protesters and the police.

Although other protesters vowed to move towards the residence of Prime Minister Prayut Chan-o-cha, the demonstration ended.

The protest leaders asked the demonstrators repeatedly through megaphones: “Do not throw anything at the police.” Then, both sides said they would “move one step backward.”

Another group of protesters gathered earlier at the Victory Monument before marching to the barracks.

Myanmar citizens also joined the rally to express their support for Burmese activists following the violent and deadliest demonstrations against the February 1 coup, where at least 18 people died.

Due to Sunday’s demonstration, the tollway exit in Din Daeng exit was temporarily closed. The police also warned citizens to avoid driving to the area.

Meanwhile, in an attempt to ease tension, MPB Commissioner Pol Lt Gen Pakkapong Pongpetra tried to negotiate with the pro-democracy leaders who had organized the protest.