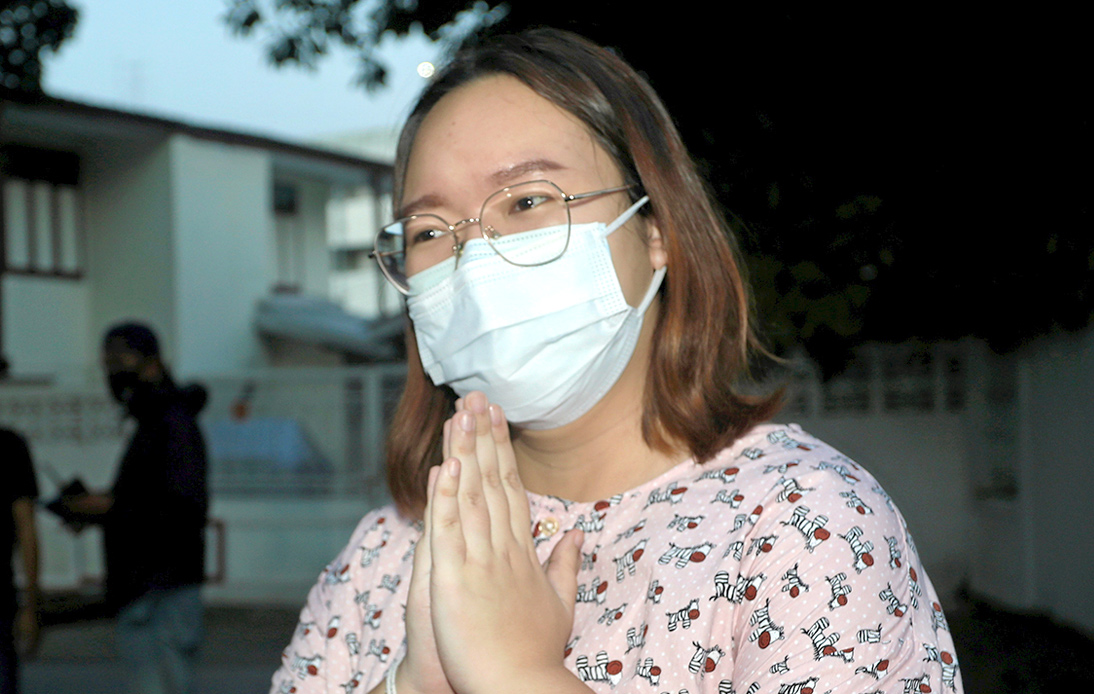 Rassadon’s co-leader, Panusaya “Rung” Sithijirawattanakul, has been temporarily released after the Criminal Court approved her bail on the condition that she must not participate or engage in activities that dishonor the monarchy.

Rung had been detained for almost two months while awaiting trial on charges of sedition and insulting the king.

On Thursday morning, the court first scheduled handing down the decision at 3:00 p.m. after an investigation into her bail request. However, it was rescheduled twice for 4:00 p.m and 5:00 p.m.

The Criminal Court granted bail to the 22-year-old student, who had been jailed since March 8, shortly after 5:00 p.m.

Ms. Panusaya’s mother put up a bond of 200,000 baht (US$ 6,405), acting as her guarantor. In order to release her, the court established some conditions, including the use of a monitoring device and the prohibition of joining any activity that could cause unrest in the country or leaving Thailand without permission.

Rung must report to the court as scheduled and avoid acting in any way that tarnishes the monarchy, the court said.

Ms. Panusaya, a third-year sociology student at Thammasat University, emerged as one of the most recognizable faces of the protests after a demonstration at her university on August 10 last year. She read a 10-point statement on the reform of the monarchy, winning tremendous support in the protest movement.

The statement was prepared by the United Front of Thammasat and the Demonstration, which later became a core group supported by Rassadon.

Both groups demand changes, including the prime minister’s resignation, the monarchy’s reform, and a new constitution. Ms. Panusaya also led several youth demonstrations before being arrested in March 2020.

The court had denied her bail until now. While in jail, she joined her partner Parit “Penguin” Chiwarak on a hunger strike, demanding bail for political detainees.

As of Thursday, Rung was detained for 59 days and on a hunger strike for 38 days. On April 23, two key activists, Somyot Prueksakasemsuk and Jatupat “Pai” Boontararaksa, were also released on bail. They must meet the same conditions that the court imposed on Ms. Panusaya.