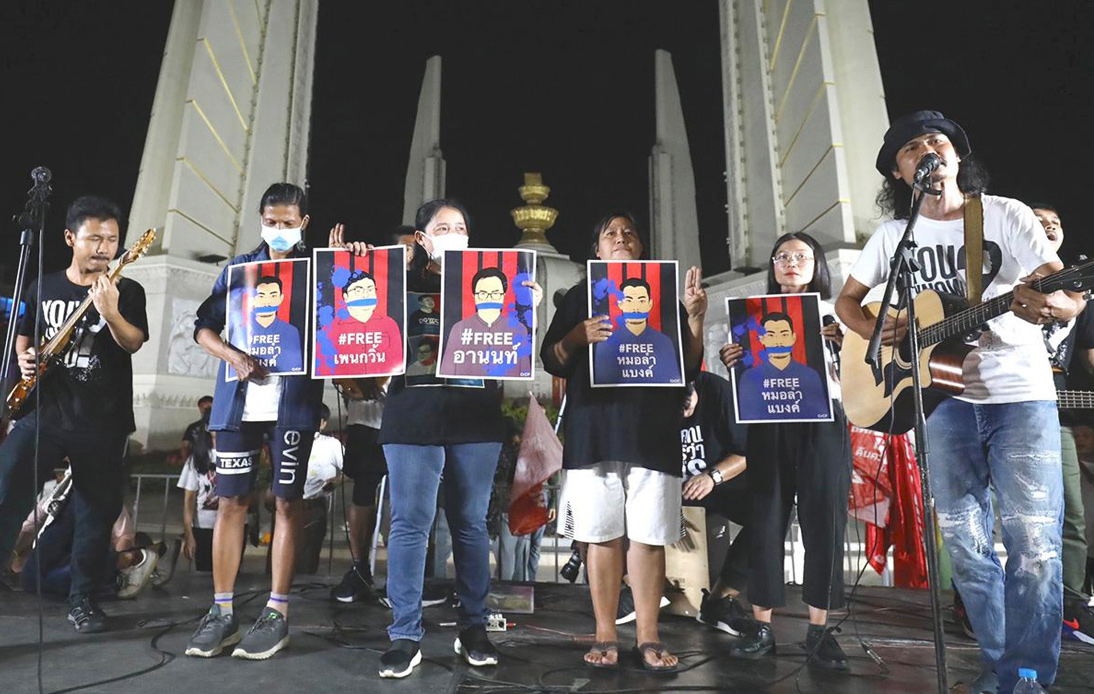 On Sunday, hundreds of protesters marched to the Democracy Monument despite police warnings that the gathering would violate the emergency decree.

Activists and members of the People Go network demonstrated at the political landmark on Ratchadamnoen Avenue, demanding democracy. They also called for the release of the four protest leaders who were denied bail after being charged with lese-majesty under Section 112 of the Penal Code and held at Bangkok Remand Prison.

Jatupat Boonpattararaksa, better known as Pai Dao Din, said at the rally site: “We are not fighting the police deployed in front of us. We are fighting against dictatorship.”

He led the group that trekked 250 kilometers from Nakhon Ratchasima to Bangkok.

The protesters marched and arrived at Kasetsart University on Saturday. Later, on Sunday, they walked the last 15 km until they reached the Democracy Monument.

However, the police warned that the event was illegal and violated the emergency decree.

Pol Col Tossaphol Ampaipipatkul, the head of the Samran Rat police station, and his counterpart at the Chana Songkhram police station, Pol Col Sanong Sanemaee, read an advertisement saying that the demonstration violated the decree.

But Jatupat insisted on holding the demonstration.

He also kept his plans to set up a stage at the rally site but pledged that the assembly would remain peaceful. It was the second pro-democracy demonstration in two days after the four rallies on Saturday.

On Saturday night, hundreds of protesters gathered in front of the Criminal Court.

Activists and demonstrators called for their detained colleagues’ release and the abolition of the lese majesté law. The said event also defied the order banning public gatherings in Bangkok.

Jatupat led the “Dern Talu Fah” march of activists, including the People Go Network, in the north of the capital.

The protesters arrived in Bangkok after leaving Nakhon Ratchasima on February 16. Sulak Sivaraksa, 87, one of the country’s leading social critics, briefly joined the rally. They also demanded the resignation of General Prayut Chan-o-cha as prime minister, the rewriting of the constitution, the abolition of the royal defamation law, and the release of fellow activists.