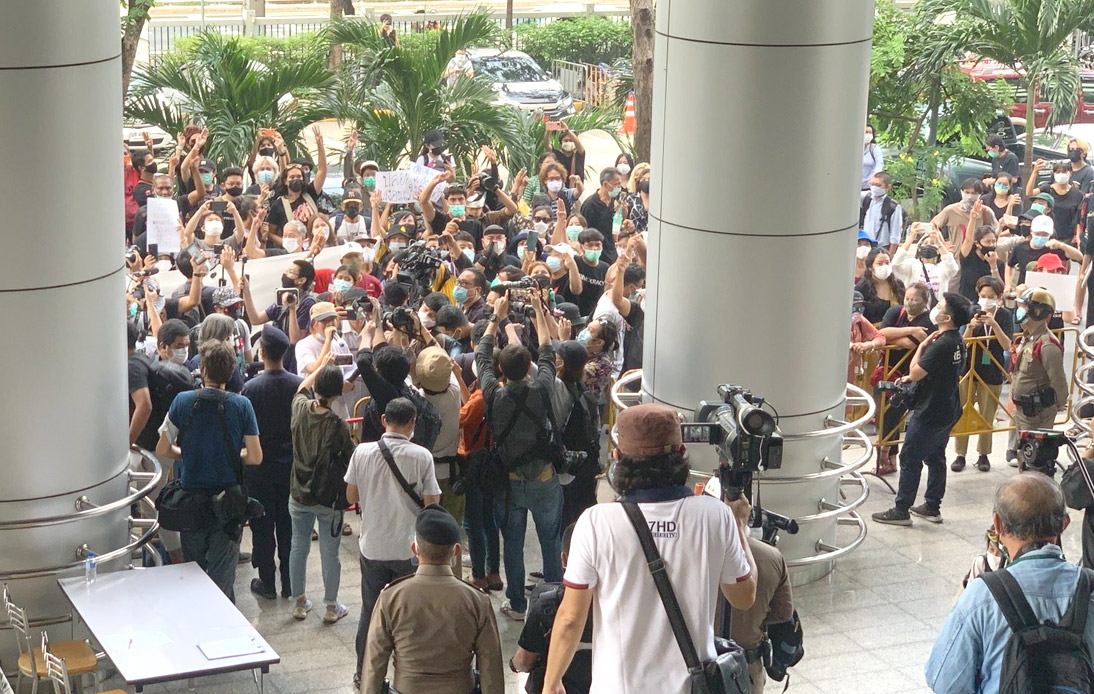 Protesters gathered in front of the Criminal Court on Sunday to show their opposition to the court’s decision to reject another bail request for detained activists, including student leader Parit “Penguin” Chiwarak.

Hundreds of people walked from Victory Monument to the court on Ratchaphisek Road to express their anger after the court decided not to bail the leaders.

“Our patience is running out. The war has just begun,” an organizer said through a loudspeaker. The event was organized by an offshoot of the Ratsadon movement called Restart Democracy (Redem).

They also flashed the three-finger salute, a symbol of resistance, and threw objects into the premises before ending the protest that lasted about an hour. The demonstrators demanded the release of Penguin, who was hospitalized after a hunger strike, and other pro-democracy activists who have been arrested.

“We are here today to show that there is injustice,” shouted a protest leader.

Attendees chanted “release the political prisoners,” and plastered posters of the judge who they believed had denied Mr. Parit’s bail. Police warned them to stop throwing objects, saying officers were ready to act if they ignored the call.

The group dispersed around 6 p.m.

The protest came after the court rejected the bail request of seven leaders, including Mr. Parit, on Thursday. The activist was admitted to Ramathibodi Hospital on Friday for treatment due to his worrying and deteriorating health condition after a hunger strike he started on March 16.

Penguin has lost more than 12 kg since then, and his body was showing signs of deterioration.

The demonstrations, led mostly by youth and students, have drawn tens of thousands of people at their peak. The movement has been calling on the government to reform the monarchy and the constitution, but it could be penalized by the lese majesty law.

Violations of this law can lead to up to 15 years in prison.

Reports indicated that at least 70 activists from the pro-democracy movement are currently facing royal defamation charges in the kingdom. This weekend, the group announced another rally but did not reveal its date.