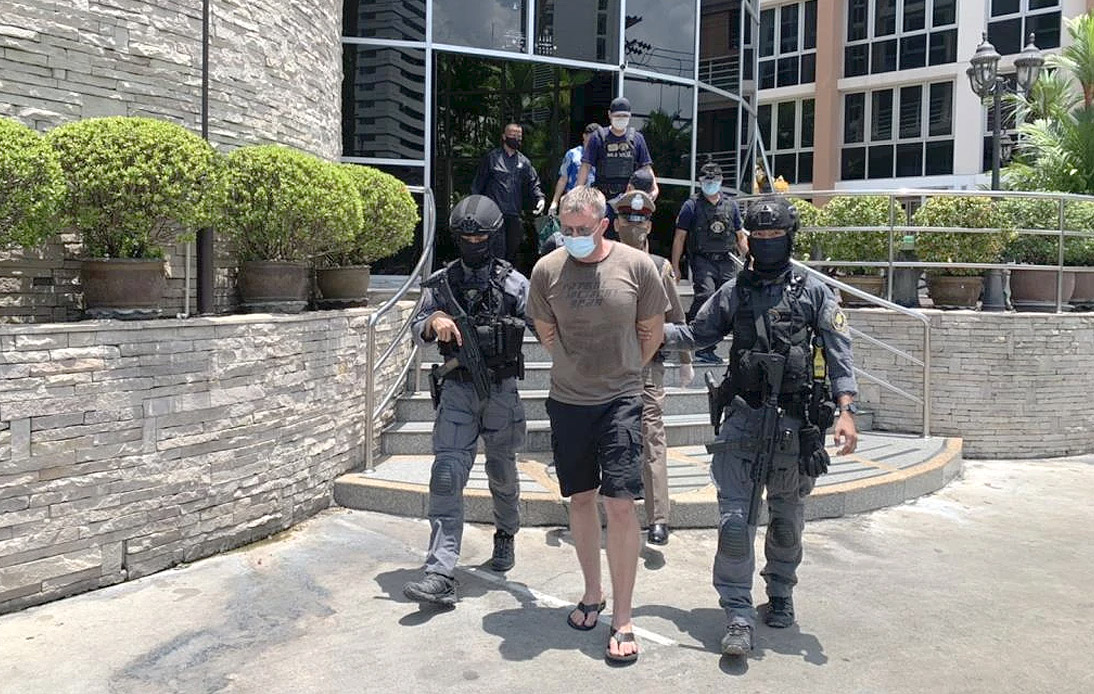 Police from the Crime Suppression Division (CSD) have arrested two Americans and a Thai man for the alleged kidnapping of a Taiwanese businessman for a ransom after a business dispute.

In the presence of Pol Maj Gen Suwat Saengnoom, the CSD commander, and some other CSD officers, Pol Lt Gen Jiraphop said that the Americans were identified as Jeremy Hughes Manchester, 41, and Louis William Ziskin, 52. The Thai’s name is Ekbodin Prasitnarit.

They all face numerous charges, including extortion, attempted murder, illegal assembly, and kidnapping for ransom.

But a commercial dispute between the two parties caused Mr. Ziskin to suffer damages of more than 93 million baht, he explained without elaborating on the conflict.

Mr. Ziskin later hired Michael Greenberg, an Israeli head of a private detective firm in Thailand, to recover the money. Mr. Greenberg and his local and foreign collaborators planned an abduction before contacting Wen Yu Chung, a Taiwanese representative of the Collection Company in Thailand, saying they wanted to buy rubber gloves from Paddy The Room Trading Company.

They made an appointment to meet at Bangkok’s Sukhumvit Soi 36 restaurant, L’Oliva, on March 28.

Mr. Chung was waiting at the restaurant when Mr. Greenberg and his friends arrived, grabbed him, and handcuffed him, the deputy commissioner said. Later, they took the man to a room at NT Place, about 200 meters away, where other people were waiting.

After assaulting Mr. Chung, the kidnappers used his phone to call his boss, Mrs. Emily, demanding 2 million US dollars from her.

They also called his relatives, demanding another 1 million US dollars in exchange for Mr. Chung’s safe release. Neither Mrs. Emily nor the man’s relatives yielded to the demand and immediately contacted the police.

With the ransom demands rejected, the kidnappers brought Mr. Chung to the Nadimos restaurant on Sukhumvit Soi 24 to talk to Mr. Ziskin.

He was eventually released and taken to a hospital for treatment. Subsequently, Mr. Chung went to the Thong Lor Police Station to file a complaint against those who had held him for ransom.

The arrest warrants for seven foreigners and one Thai were issued following a police investigation.

Without giving details about the arrest, Pol Lt Gen Jiraphop said that the police arrested Mr. Manchester, Mr. Ziskin, and Mr. Ekbodin in Bangkok. All three denied charges but were turned over to Thong Lor police while legal proceedings continue.