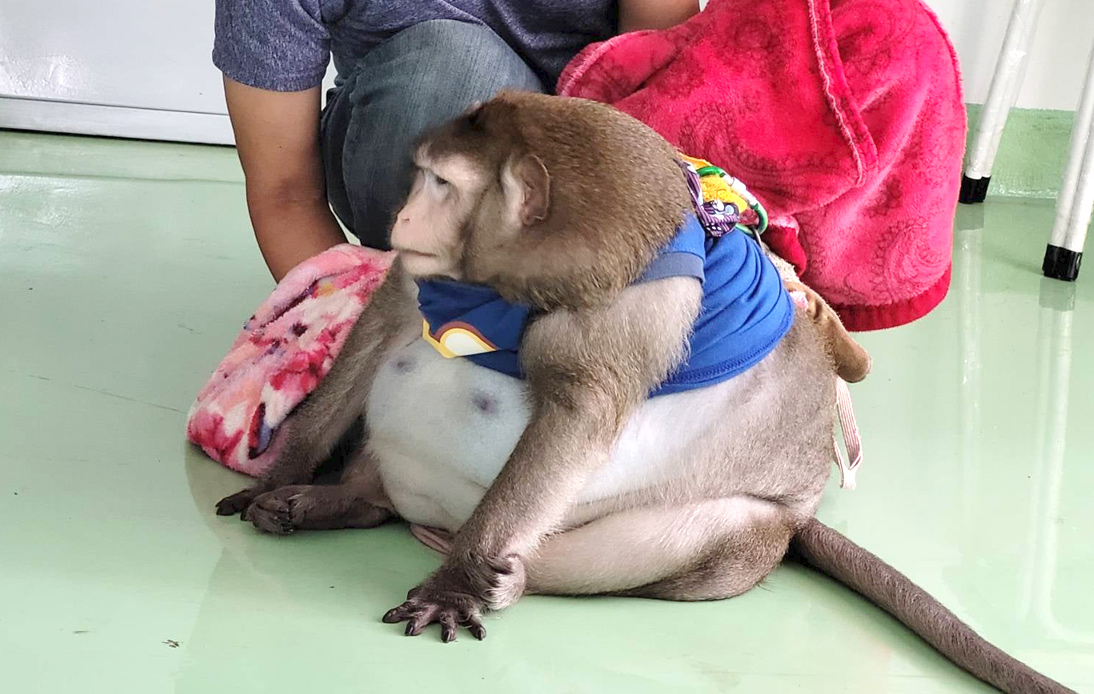 A Bangkok market food vendor’s obese monkey was seized by wildlife authorities and is now on a strict diet at a fat camp.

The animal, known as Godzilla, ballooned to twice his normal size after being tied to a market stall where he got treats and junk food from visitors. It is a three-year-old macaque that currently weighs 20 kg (44 pounds).

The video of the morbidly obese primate went viral on social media this week.

Godzilla was compared to another famous monkey named Uncle Fatty, who died two years ago from overeating. It was known that it belonged to a meatball vendor in the Min Buri district of Bangkok.

A local concerned about his health made a complaint with the Department of National Parks, Wildlife and Plant Conservation.

Afterward, wildlife officials visited the market and found that Godzilla was tied to an ill-fitting harness. They carried the monkey away in a cage on Monday afternoon.

Wildlife authorities will send him to a fat camp where he will be put on a strict diet and exercise regimen in order to get back to nature.

Navee Changpirom, forestry chief at Thailand’s Department of National Parks, said: “We received a report from someone who was concerned about the health of the monkey. Our investigation then found the owner. He said that he brought the monkey home and took great care of it like one of his family’s own members.”

“He and his family fed the monkey so well that it became fat,” Navee Changpirom added.

The forestry chief explained that market-goers used to find the monkey cute and feed it, stating that Godzilla became a favorite attraction. The owner, Manop Emsan, said he cared for the monkey since he was a baby after his parents died and his former owner abandoned him.

Wildlife official Phuwanak Krumn said Godzilla is “critically obese” and needs to follow a diet as soon as possible.

The wildlife laws in Thailand classify macaque monkeys as protected animals. In this regard, Forestry chief Navee Changpirom said: “We have to remind people that if they find a wild monkey they should never keep them.”

“The correct step is to call the local police and wait for officials to collect the animal and give proper care,” Navee Changpirom added.