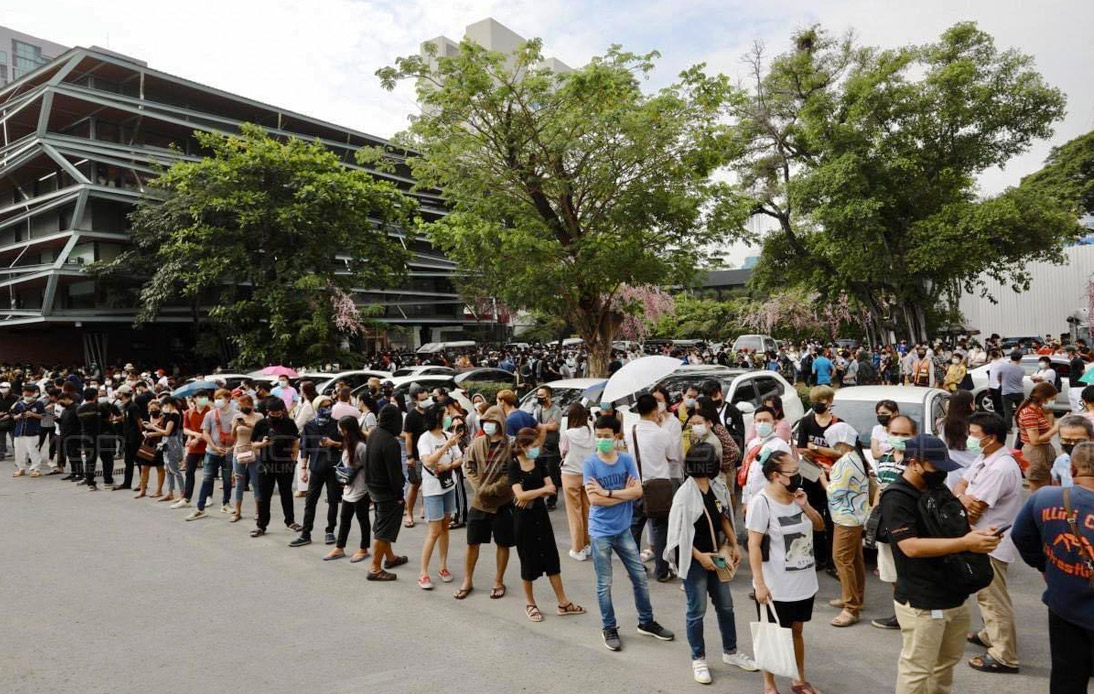 Over a thousand people queued for hours to be tested for COVID-19 yesterday in Thonglor, as health officials performed massive testing after finding hundreds of infections in areas near nighttime entertainment venues.

The disease control official Wichan Pawan said Thursday that three royally-provided mobile biosafety units administered 1,176 tests at the site. He said that the testing would be held again on Friday and Saturday.

About 100 of 2,000 people screened during the week had tested positive for COVID-19, an anonymous health worker said.

The man, who declined to give his name because he was not authorized to speak to the media, stated that most of the individuals who contracted the disease belonged to high-risk groups, including nightlife operators and their families.

Photos of people waiting to get their noses swabbed at Arena 10 in Thong Lor circulated on social media on Thursday.

They showed that social distancing was not practiced in the lines and people crowded very closely. Some expressed concern that the mass test site could become a super-spreader event.

Police in the area said they had received complaints about the situation and would take action in the coming days.

Ekkamai office worker Pichet Kraijai said she arrived at 8:00 a.m. and was still waiting at 1:00 p.m. to be tested. She said: “they should announce a definite number of how many people can get the service each day. In the morning they said everyone here will get a swab. Ten minutes ago they said only 500 more.”

“Now they must have changed it to everyone here again because I was counted No. 500,” she added, noting that there were still people behind her.

Pichet said that while it is good that people can get free tests and know their results in a matter of hours, health officials should strive to organize crowds and improve wait times.

More than 600 people were still in line around noon.

Many of them were workers in nearby restaurants and offices and claimed to have arrived at the scene at 7:00 a.m. but were waiting for the staff to come back from their lunch break so they could get nose swab tests.

Tests were available only on a first-come, first-served basis to those who remained in line, and officials declined to give queue numbers to attendees.

Authorities have announced that mobile units outside Barbarbar pub would be operating from 9:00 a.m. to 3:00 p.m. on Fridays and Saturdays, expecting to test at least 1,000 people each day.