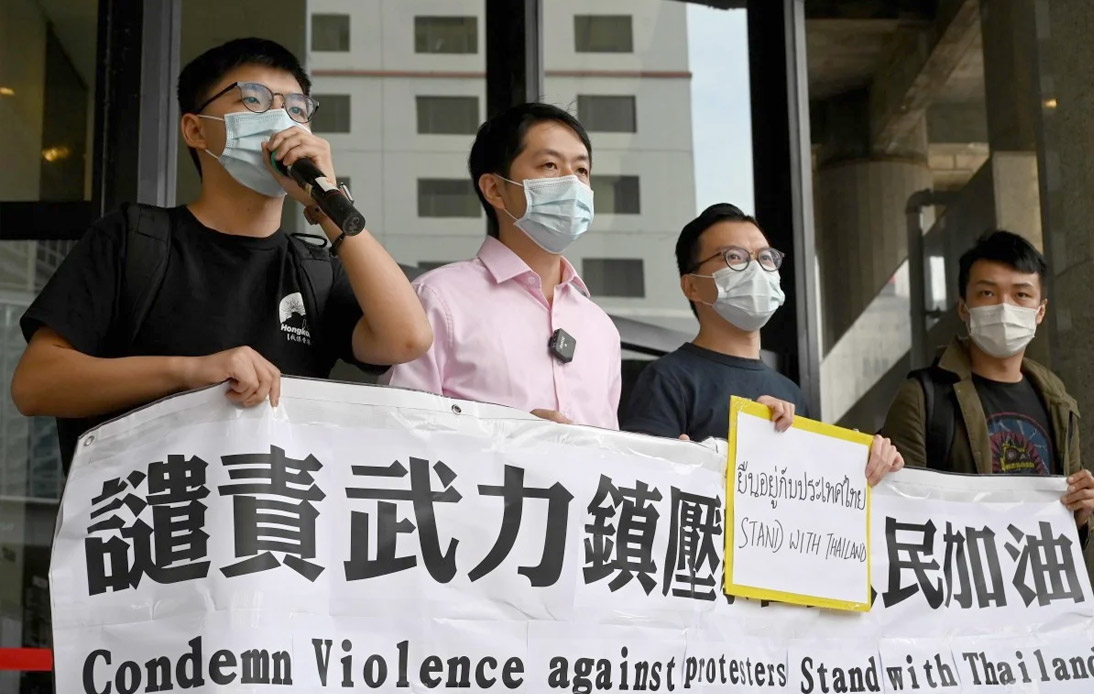 Hong Kong students pledged loyalty and support to protesters of the pro-democracy movement in Thailand, following a growing wave of anti-government protests that have raged in the capital for more than a week.

Protesters are demanding the ouster of Prime Minister Prayut Chan-o-cha, who took power in a coup and was reinstalled after a controversial election in 2019.

They are also asking the authorities to approve an amendment to the democratic charter and the reform of the monarchy.

The protests started in Bangkok and spread to other provinces. Now they are sparking protests abroad as well.

On Monday, activists and students from Hong Kong gathered at the Thai consulate in the city, intending to show solidarity towards their counterparts in Thailand.

One of the leaders of the democratic movement, Joshua Wong, participated in this demonstration.

Other activists are doing the same in Japan and other countries outside of Asia, such as the UK, France, and the US.

Angel Woo, a student at the Chinese University of Hong Kong (CUHK), said that most Hong Kongers stand with people in the pro-democracy movement called the “Milk Tea Alliance.”

It is an online bloc of Hong Kong, Taiwan, and Thailand that stands in defiance of China.

In an online interview by the Bangkok Post, she said: “I think there are a lot of similarities [with us], such as [protesters using the messaging app] Telegram and signals for security.”

Free Youth and United Front for Thammasat and Demonstration (UFTD) asked their social media followers to use Telegram after rumors emerged about a possible Facebook banning by the state.

However, Woo claims that protesters in Thailand are more likely to achieve victory as they are directly challenging the state. Protesters in Hong Kong confront authorities both from the city and from China.

The Hong Kong protests began as a response in opposition to the government’s plans to pass an extradition bill last year.

Protesters fear that this law would give China greater power over Hong Kong, which has remained a semi-autonomous region.

The bill was eventually scrapped, but the activists decided to protest against the government. Nevertheless, in June this year, China passed a national security law that prohibits foreign interference, secession, subversion, and terrorism.

Student Leung Pak-hei said that the imposition of this law and its harsh punishments force the protest movement to go underground. Besides, he indicated that the protests against the Thai government evoke what happened in Hong Kong last year.

In this sense, he said: “A lot of Hong Kong protesters wish Thais good luck because they have yet to achieve their five demands. They only managed to achieve one [the withdrawal of the extradition bill]. For the other four, the government refuses to concede”.