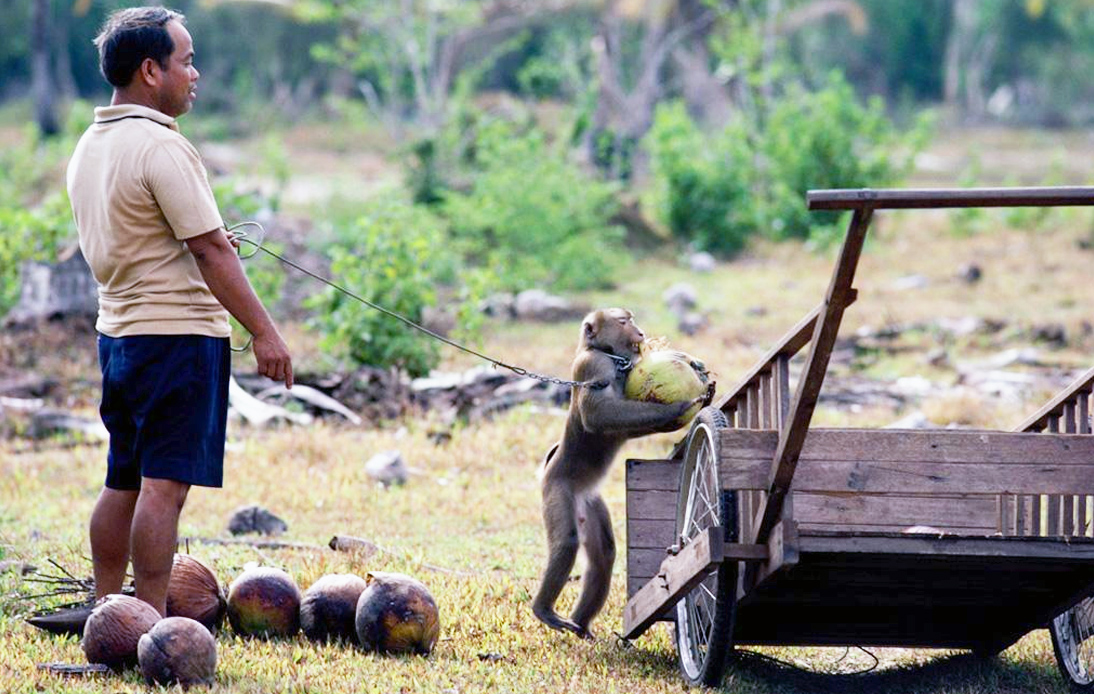 Following Peta’s allegations about Thailand’s coconut farms engaging in inhumane monkey labor, the Commerce Ministry, coconut farmers, and monkey school owners have rubbished the claims, stating that they plan on taking foreign diplomats to the sites where the monkeys work.

The permanent secretary for commerce, Boonyarit Kalayanamit, stated that the monkey owners neither abuse them nor exploit them, and have trained them to pick coconuts using humane methods.

“However, the ministry is ready to invite foreign diplomats to visit coconut plantations and see how the monkeys pick coconuts so they will realize this is not animal cruelty [as claimed by People for the Ethical Treatment of Animals (Peta)],” Mr. Boonyarit said.

He also added that he has directed the commercial officers working in Thai embassies to convey the same information to retailers abroad. The ministry will also engage in talks with the Agriculture and Cooperatives Ministry to discuss other potential solutions.

Pramual Pongthawaradej, heads of the subcommittee dealing with the issue of decreasing prices of coconuts, had stated that they have instructed the operators of coconut milk plants to explain their practices to Peta.

Mr. Pramual also added that the subcommittee has sought further information about the use of monkeys in coconut plants from the Department of Agriculture.

An owner of a monkey training school situated in Surat Thani’s Kanchanadit district, Ms. Somjai Sae Kow, claimed that monkeys are no longer captured from the wild to help with coconut picking.

According to M Somjai, each monkey has a different capacity when it comes to picking coconuts, and for each coconut that is picked, the monkey’s owner is paid 2 baht.

“Foreigners may not understand our livelihood. Also, humans are not built to climb up a coconut tree to pick fruit. They will be at risk, compared to monkeys which have the natural ability to do so,” she said.

Chaowalit Chusaneh, another owner of coconut-picking monkeys has also shot down allegations of maltreatment of these animals.

“The current batch of monkeys working for us were bred from previous generations.

“There is no cruelty. Actually, they are looked after well. They are fed well with rice, milk, and fruit three times a day. They are treated like family members,” Mr. Chaowalit said.

After Peta has made allegations about the inhumane treatment of the monkeys, several companies like Waitrose, Ocado, the Co-op, and Boots promised to take all Thai-based coconut products off their shelves.