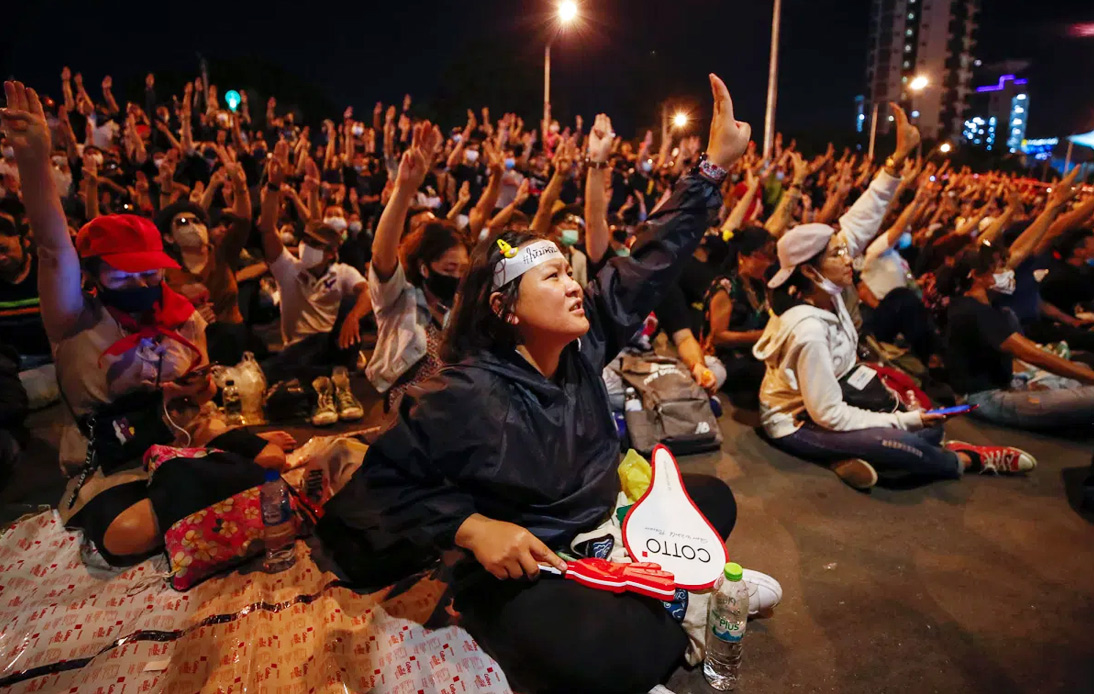 Anti-government protesters gathered outside SCB Park, the headquarters of the Siam Commercial Bank in the Chatuchak district, on Wednesday night.

The event was held under the watchful eyes of the Border Patrol police lining the fence.

Protesters crowded the area, collapsing traffic along the road leading to the Prachanukul intersection.

Besides, both protesters and rally guards erected metal barriers on the road at the Ratchayothin intersection leading to the Lat Phrao intersection.

This action aimed to prevent vehicles from turning left into the rally site on Ratchadapisek Road.

Motorists could only go directly to the intersection of Kaset.

Leading members of the protest, including famous activists and organizers, climbed into the back of a truck and took turns criticizing the government using loudspeakers.

Parit “Penguin” Chiwarak, co-leader of the protest, arrived around 3:00 p.m. in a yellow duck suit. He carried a sign that said: “Citizens Area.”

The student activist also said that the demonstration had been initially planned in front of the Crown Property Office but was later moved to SCB park to avoid possible violence.

Again, the protesters filled the area and reiterated their demands, including the resignation of Prime Minister Prayut Chan-o-cha, the royal institution’s reform, and a new constitution.

Ducks, which have become another symbol of the protests, were everywhere during the demonstration on Wednesday.

Moreover, the meeting staff handed out 3,000 coupons with a yellow duck image to the protesters. Each was worth 10 baht and could be exchanged for food at nearby participating ports.

A parking area was thronged with stalls selling grilled hot dogs, sausages, fish balls, and other items like T-shirts.

The meeting ended after the organizers’ closing announcement at 9:17 p.m., and they said another protest would take place on Friday, without revealing the location.

An explosion and five shots were heard near the demonstration site around 10:15 p.m. while the protesters remained there. The Erawan Emergency Medical Center reported that a man was shot in the abdomen and was rushed to Praram 9 Hospital.

It was not confirmed whether the incident was related to the political act.