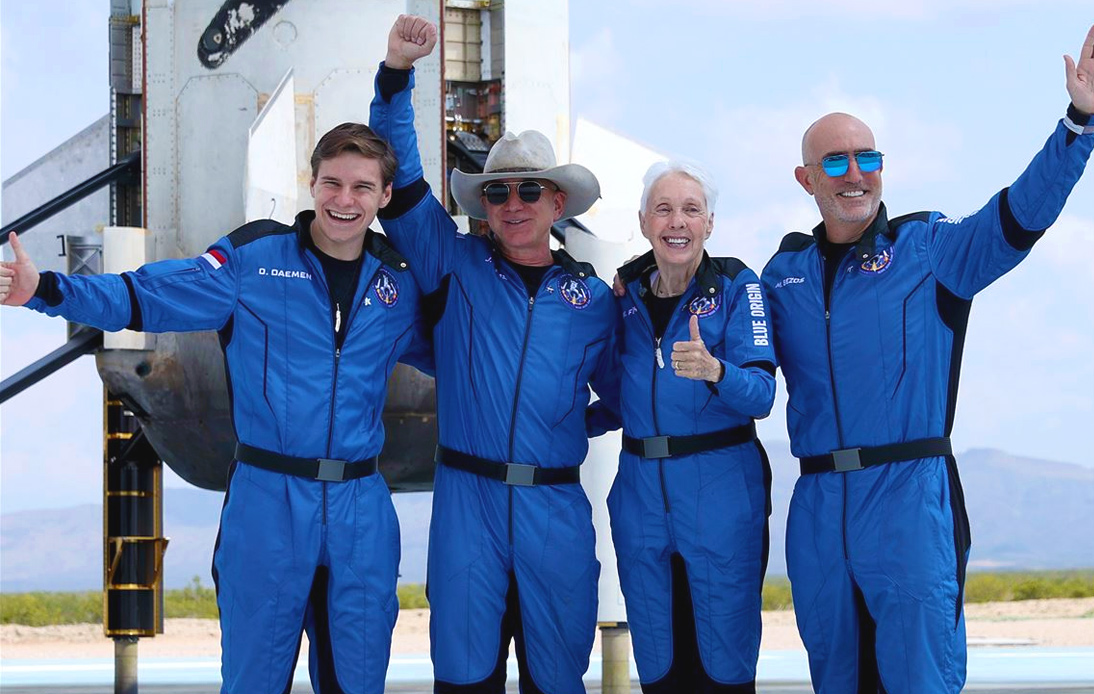 On Tuesday morning, the world’s richest man Jeff Bezos briefly flew into space on the first crewed flight of his New Shepard spacecraft.

Mr. Bezos traveled to space and back on an 11-minute supersonic ride alongside his brother, Mark Bezos, 82-year-old pilot and one of the Mercury 13 women Wally Funk, and 18-year-old recent high school graduate Oliver Daemen.

Mrs. Funk became the oldest person to travel to space while Mr. Daemen, whose father bought his ticket, was the youngest astronaut.

The four-person team traveled into space aboard the rocket and capsule system developed by Blue Origin, founded in 2000 by Mr. Bezos.

The flight was the first crewed mission for the suborbital space tourism rocket, which the company expects to use to take wealthy customers for high-flying thrills.

The capsule has the biggest windows ever flown in space and promises breathtaking views of the Earth for its future passengers.

The rocket lit its engines at 8:12 a.m. CT at the Blue Origin launch site in rural West Texas.

The space vehicle was launched up to more than 65 miles, topping out at an altitude of 351,210 feet.

After two minutes into the flight, the capsule separated from the rocket and advanced until it crossed the Karman line, the most recognized boundary of space lying 100 km up.

Upon reaching the historic flight path’s peak, passengers soaked in panoramic views of the cosmos and enjoyed around three minutes of weightlessness with their seatbelts unstrapped.

The launch was visible to reporters on the ground and broadcast live.

After the capsule touched back down again after 10 minutes and 10 seconds, the Amazon founder excitedly said: “Best day ever!”

In a press conference after the launch, he added: “My expectations were high and they were dramatically exceeded.”

Also, in the post-flight briefing, the company showed a video of passengers performing somersaults and tumbles during their weightlessness period, with breathtaking views of Earth seen outside.

Mr. Branson, Mr. Bezos, and other participants in the “billionaire space race” have been criticized for offering what many have described as fun rides for the super-rich.

However, Mr. Bezos insists that he has kept an environmental vision for his space tourism plans’ development.

“We need to take all heavy industry, all polluting industry and move it into space, and keep Earth as this beautiful gem of a planet that it is,” he said.

“It’s going to take decades and decades to achieve, but you have to start, and big things start with small steps… that’s what this sub-orbital tourism mission allows us to do, it allows us to practice over and over,” he added.