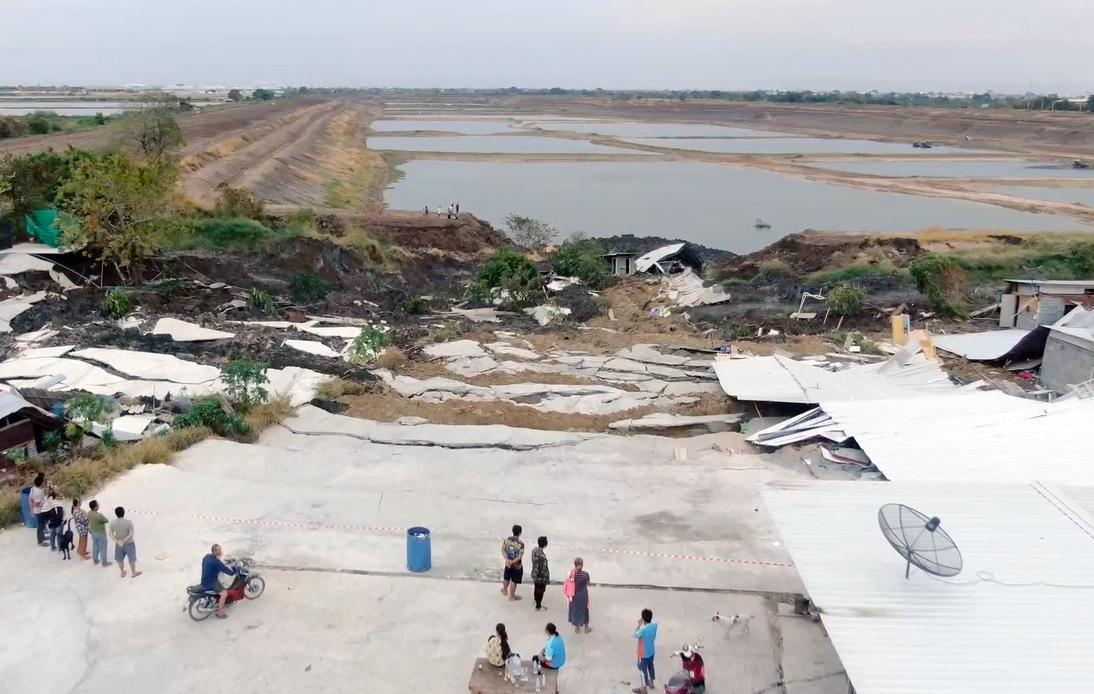 Twenty-five houses in Bang Phli district collapsed when the land crumbled into a canal on Thursday night, forcing families to flee.

A Soi Srisamphan resident said the ground between the Bang Krabue Canal and the community had started to crack on Monday. Both the authorities and the company that owns the pond were informed about the matter, but there was no response, the witness stated.

Pol Lt Col Sitphong Panthaisong, investigation chief at Bang Phli police station, said officers and rescue workers had been called to the community around 09:00 p.m. Upon arrival, they found a row of collapsed houses in Khlong Bang Hia.

People had already begun to flee their homes and take out their belongings when they arrived, he added.

Emergency services providers were deployed to help distraught residents, who said an earth embankment and flood embankment along the 400-rai pound had started to subside on Monday night.

A subcontractor had started to repair the embankment with a backhoe, but the ground was very soft and the land gradually subsided.

Witnesses said the subsidence had become very severe on Thursday night when the earth embankment broke and water from the canal flooded the 100-meter-deep pond. After the canal dried up, the shoreline started to crumble, pulling 25 houses down.

No fatalities have been reported, and most residents were able to get their belongings out of their homes in time. However, police have said it is not yet safe to remain in the community and the affected area has been cordoned off for safety.

The pond was reportedly created more than 20 years ago by a company that removed soil from the area to later use as topsoil for construction.

Bang Phla tambon administration organization’s former chairman Chanin Rungruang revealed that they had received complaints about soil excavation from the old pond. But a local official said the company that owns it had permission to dig up and sell the dirt.

Pol Col Wirot Tadso, superintendent of Bang Phli district police, told the media that he had ordered officers to set up a temporary office where affected residents could lodge complaints. The company’s manager will be asked to produce an operating license and come in for questioning, he added.