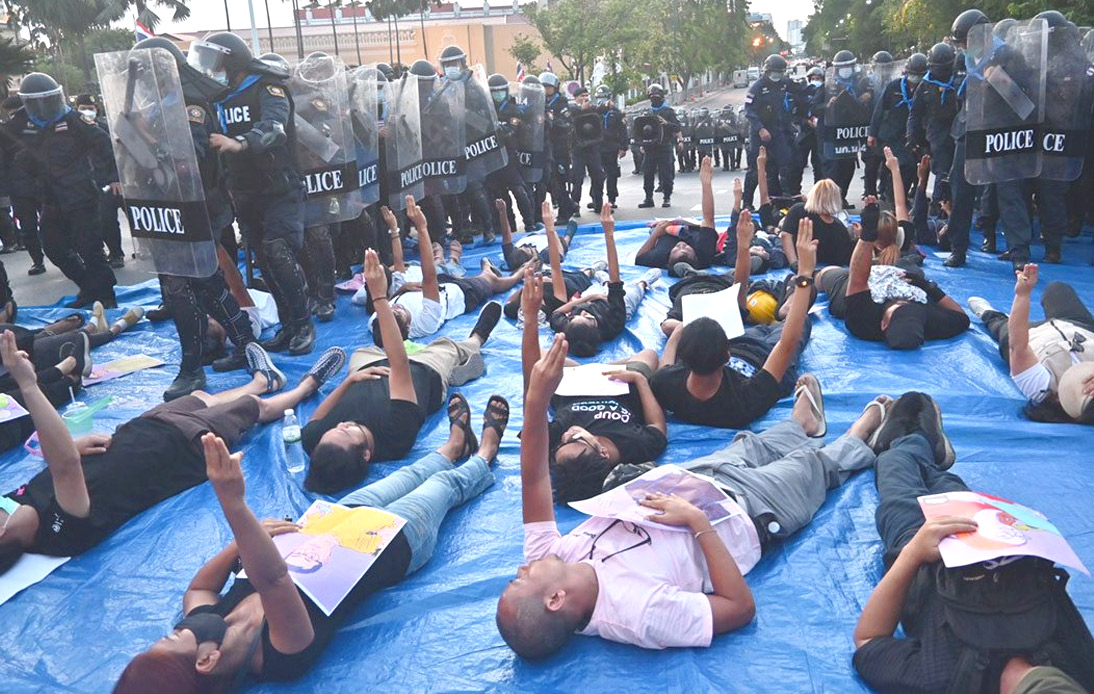 On Sunday, seventy people were arrested during an operation by the Metropolitan Police Bureau (MPB) to clear a pro-democracy demonstration set up near the Government House.

Reports indicated that four companies from the Protection and Crowd Control Division police arrived at the protest site around 6:00 a.m.

Protesters gathered at a soi off Phra Ram 5 road by Klong Phadung Krungkasem near the Chamai Maruchet Bridge and Government House. Upon arrival, police officers used loudspeakers to order attendees to collect their belongings and leave the area in three minutes.

The demonstrators tried to negotiate to get more time, as it was still early in the morning, but their request was denied.

Police continued to advance from the Chamai Maruchet and Orathai bridges, surrounding the protesters. According to Deputy MPB Chief Pol Maj Gen Piya Tawichai, 70 protesters had been arrested and taken to the Border Patrol Police Region 1 headquarters in Pathum Thani.

The arrested protesters would be charged for violating the Communicable Disease Control Act and the emergency decree, he added.

Two groups of demonstrators occupied the site near the Government House.

The first group was the Save Bang Kloi Coalition of ethnic Karen people from the Kaeng Krachan National Park in Phetchaburi, who have been demanding justice for ethnic minorities since the beginning of this month. The second one included members of the Ratsakon group who had marched to the capital from Nakhon Ratchasima.

They were demanding the release of its arrested leaders, the resignation of the prime minister, the constitution amendment, and the lese-majesty law reform.

Members of the Ratsadon group joined the Save Bang Kloi Coalition on March 13, when Pol Maj Gen Piya allegedly ordered them to leave for the first time. Leaders of pro-democracy groups called a meeting at BTS Asok station at 5:00 p.m. on Sunday.

In response, the MPB ordered 600 police officers to deal with the protest, with another 1,000 on standby.

After the police cleared the rally site, the detained protesters were taken in police vans to the Border Patrol Police Region 1 headquarters in Pathum Thani.