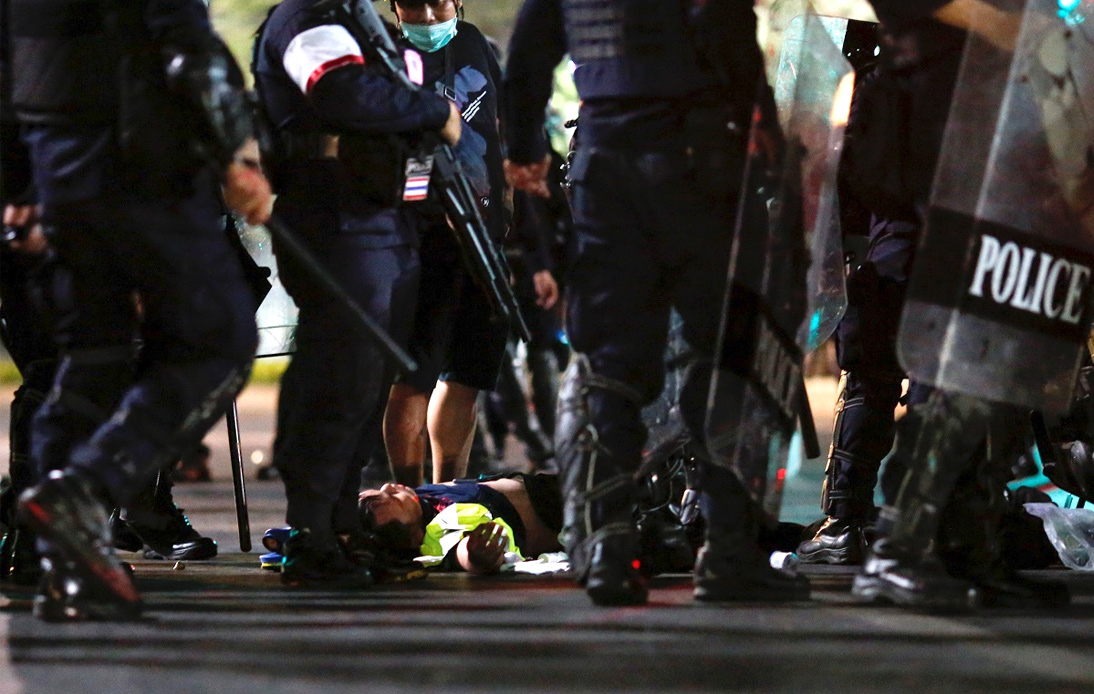 A volunteer health worker, who was detained and beaten by police after Saturday’s protests turned violent, has been charged with violating the emergency COVID-19 rule, his organization reported on Monday.

Anti-government protesters clashed with riot police officers over the weekend.

According to the Association of Doctors and Nurses, which provides emergency medical care and first aid at the protests, Purapon Wongchiak suffered bruises and muscle aches after police officers ordered him to get off his motorcycle and beat him repeatedly with truncheons.

The group also said that the 19-year-old medic volunteer had not received medical attention since he was detained and taken to a police base northeast of Bangkok.

One of the group’s leaders named Toon, who asked not to be identified by full name for fear of repercussions, said that Purapon is due to appear in court today via video link.

“His lawyer told me that he is expected to be released on bail this afternoon. He hasn’t seen any doctors, and all he could do is to treat himself with what he got in his first aid kit,” the leader added.

Purapon was one of 11 people arrested during the clash between protesters and police near the Grand Palace on Saturday.

Police recently reported that eight of them faced six charges, including violating the Emergency Decree that bans mass gatherings and resisting arrest. Officers also said three of the people arrested were released shortly after being found to be “unrelated to the protest.”

If Purapon is found guilty, he could face up to two years in prison.

Videos that went viral on the Internet showed police beating Purapon, causing widespread condemnation. However, the metro police commander Phukphong Phongpetra told the media that the volunteer was one of the protesters who incited the violence.

“We found that he is not a professional doctor or nurse. He was among the group that caused public disturbance,” he said.

Nonetheless, the volunteer group leader said the police were only trying to save their face for mistaking a health worker as a demonstrator, adding that investigators even tried to negotiate with Purapon to withdraw his lawsuit against the police in exchange for being released without charges.

The Medical Council of Thailand urged all parties to protect healthcare workers at protest sites.

However, it refuses to officially recognize volunteer first responders, claiming they were not involved with politics. “If one wants to become a volunteer healthcare provider, they must treat everyone equally,” Ittaporn Kanacharoen, sec-gen of the medical council said.