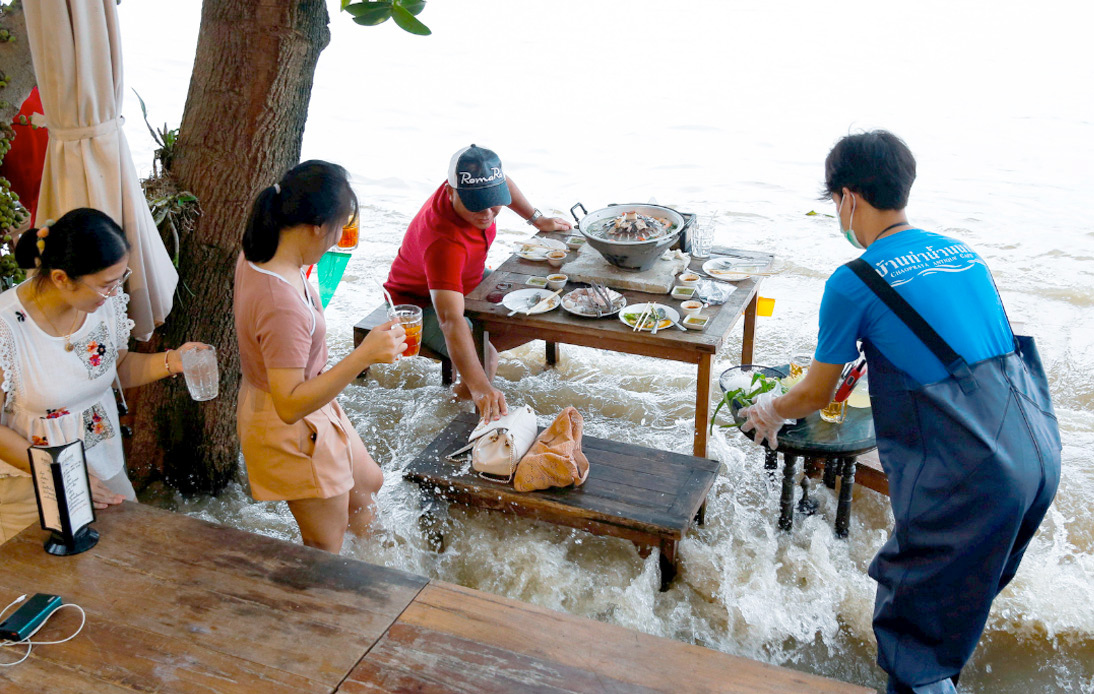 Chao Phraya River’s rising tide, reported this week, appeared to be another hurdle for businesses already grappling with the Covid-19 pandemic’s fallout.

However, it became an opportunity for Riverside restaurant owner Titiporn Jutimanon, who had already suffered a drop in her customer base and experienced frequent government-ordered closings to prevent the spread of the novel coronavirus.

Instead of being forced to close due to the high water levels, Titiporn’s restaurant has remained open, offering customers a shin-deep and delicious dinner while enjoying a peculiar attraction: avoiding getting wet by those waves passing boats create.

Titiporn, who runs the Chao Phraya antique cafe in Nonthaburi province, north of Bangkok, said people love wading into the water and playing with big waves. “Customers absolutely love the waves. What I thought would be a crisis turned into an opportunity,” she stated.

Videos of the particular restaurant, with customers sitting on knee-level water-soaked chairs, have gone viral on social media platforms. As diners take huge bites of food, long-tail boats whiz by, forcing them to move out of the way when the waves hit.

Titiporn’s business had been forced to close in the past. Although the restaurant’s owner had already prepared for more financial losses, she did not give up and decided to open its doors despite the increasing flooding.

Surprisingly, customers not only accepted her idea but loved soaking up during such a fun and exciting adventure while dining.

Now, Titiporn hosts two dinner sessions each night when the river’s water level peaks. Customers sit down to taste the exquisite dishes on her menu while cheering and laughing as the water streaming through the restaurant knocks over the wooden stools.

“Not only do they love the atmosphere and the barbecue pork and the view of the sunset… the flood became an additional unique factor,” she said.

“I feel so lucky that the customers love it, the flood wasn’t a challenge for them to come,” Titiporn went on, adding that she is glad to have braved the floods.