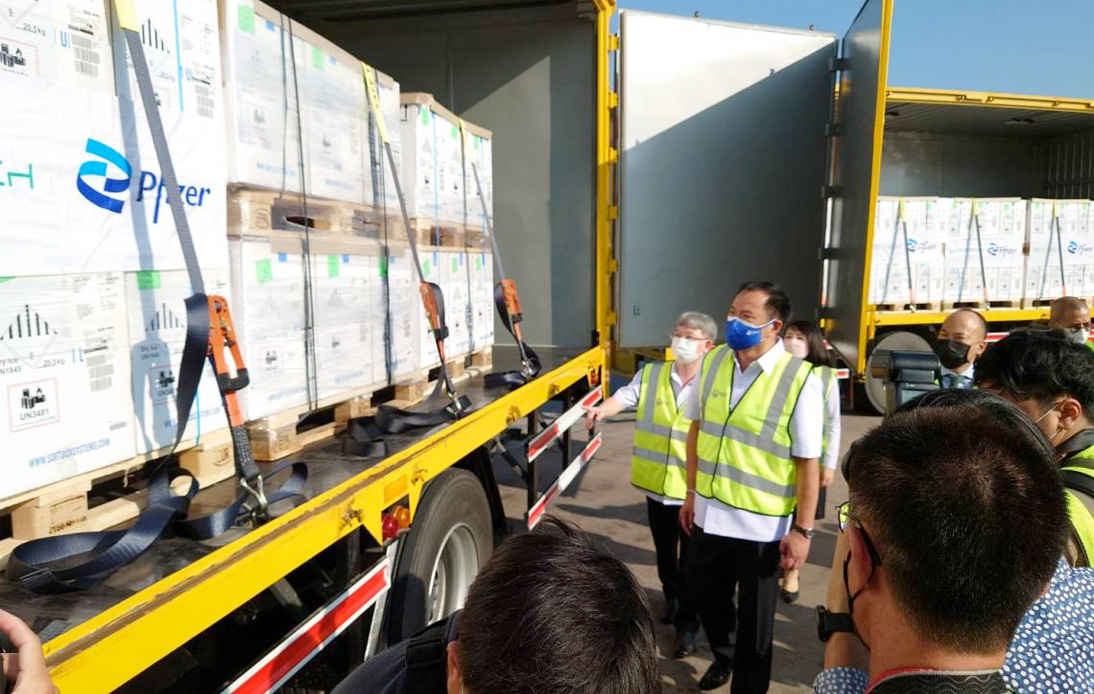 On Wednesday morning, the government announced that two million doses of the Pfizer mRNA vaccine had been delivered to Bangkok, coming from the United States.

Thailand’s Public Health Minister Anutin Charnvirakul visited the Suvarnabhumi International Airport to monitor the arrival of the jabs’ batch, which is part of 30 million Covid-19 vaccine doses that Thai authorities had ordered for this year.

Health officials recently announced that the Pfizer jab would be administered to over 5 million young people aged 12-18 years.

Mr. Anutin stated that the 30-million group of Pfizer vaccine doses would be enough to inoculate young Thais, adding that the rest would be administered to other groups, including those who would receive booster doses.

The Thai Food and Drug Administration (TFDA) said it would inspect such doses before distributing them to designated units across the country. Vaccinations are set to start next week, Mr. Anutin added.

At the moment, people aged 12-18 years will only receive a Pfizer vaccine while the government awaits approval from the TFDA, Mr. Anutin explained.

Inoculations will initially take place in schools, where medical staff and equipment have been prepared to treat people who show side effects after being vaccinated.

The minister also said that the Public Health Ministry would use the mix-and-match regimens approved by the immunity booster committee on combining vaccines to generate high antibody levels. It could include combined Sinovac-AstraZeneca and Sinovac-Pfizer vaccinations or booster AstraZeneca or Pfizer shots after two Sinovac doses.

The Public Health Ministry has also tried to negotiate discounted prices for Pfizer vaccines, Mr. Anuntin stated, adding that Thailand would procure the protein unit-based jabs and other vaccines alternatives currently in development.

The government previously said that 71 million Covid-19 shots were expected to arrive in Thailand during the fourth quarter this year, with 24 million to be delivered in October alone. Most vaccines arriving next month have been manufactured by AstraZeneca, it stated.