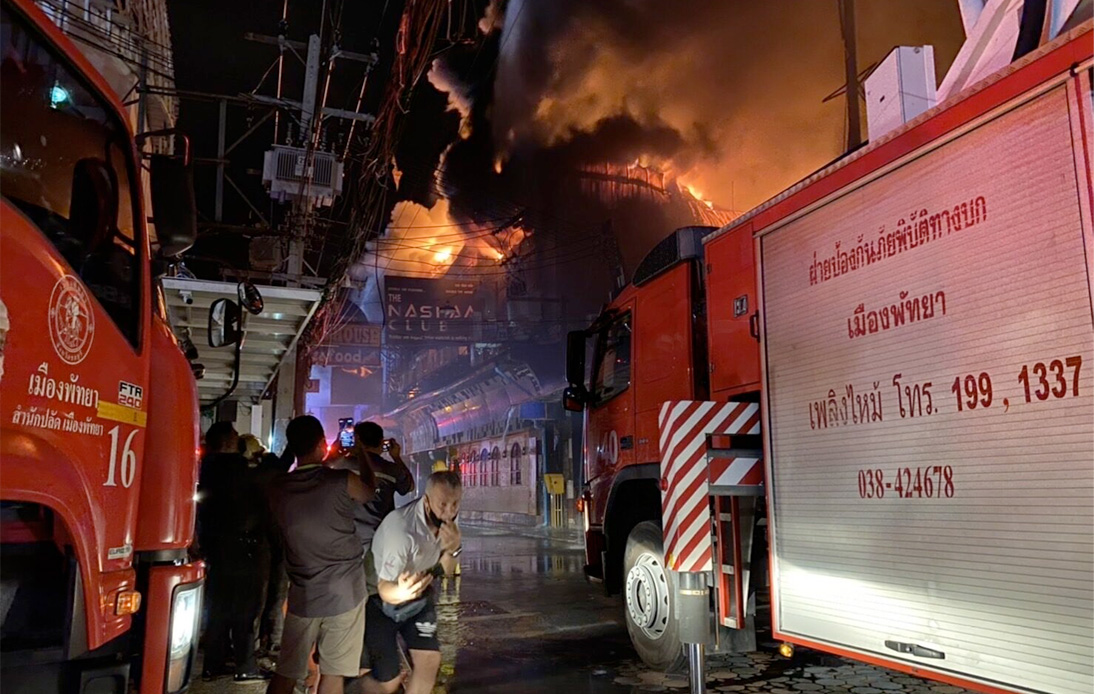 A major fire raged in a closed nightclub on Pattaya’s Walking Street after flames broke out on Sunday evening during the mandatory curfew.

Nashaa nightclub, located at Walking Street’s southern end near Bali Hair Pier, was struck by the fire at around 9:30pm and suffered damages estimated in millions of baht, firefighters said.

No injuries were reported, as no customers were at the venue due to restrictions imposed in Chonburi, including nightclubs closures and a strict nighttime curfew.

More than ten units from local fire departments responded to the emergency call to combat the blaze, which could be seen from several miles away. Many residents concerned about the fire’s ferocity reported the incident on social media.

Firefighters used a fire crane and ladder to put out the fire in a mission that lasted over an hour. But some parts of the building continued smoldering from embers, and smoke trails could be seen in the area as firefighters secured and inspected the premises.

According to firefighters, strong winds in the area and various flammable objects in the building contributed to the spread of the fire, which eventually encompassed the entire multi-level nightclub complex.

Thankfully, they managed to prevent the blaze from spreading to other businesses on Walking Street.

A security worker from Nashaa, marketed as the largest and most famous Indian nightclub in the Pattaya area, said explosion-like loud noises were heard before the fire broke out on an upper floor.

The watchman said he thought it was a thief but discovered that such noises were caused by a fire. He tried to use a fire extinguisher to put out the flame, but it was too strong.

The blaze’s cause has yet to be confirmed, but forensic officers are expected to review the scene later today.