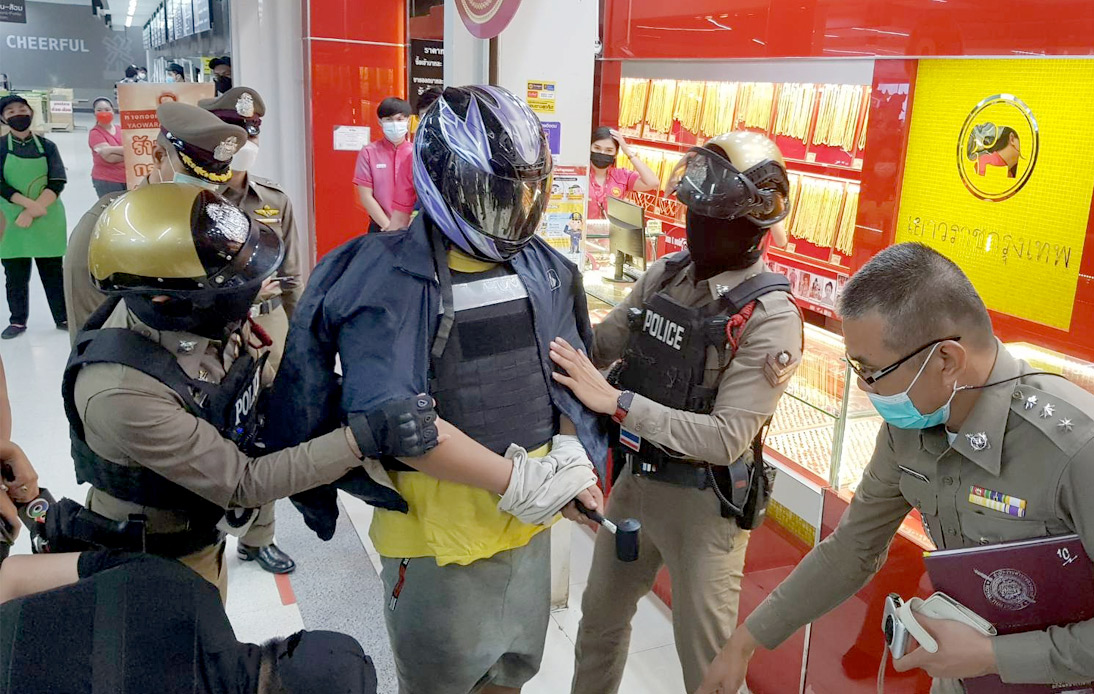 Police arrested a man for allegedly stealing gold necklaces worth nearly one million baht from a shop in Muang district, Chaiyaphum.

The 30-year-old suspect, later identified as Sitthichok Khongthong of tambon Banlao, was arrested around 10:00 p.m. on Tuesday, a few hours after he reportedly robbed the shop. He was armed with a hammer, police said.

The shop’s employees panicked when police officers arrived, he stated.

The man reportedly pulled a hammer from his shoulder bag and threatened the employees. He fled after climbing onto the counter and grabbing a handful of necklaces from the display shelf.

An employee identified as Ms. Rujida told police that the suspect was wearing slippers, had threatened the workers with the hammer, and told them it was a robbery. According to police documents, he stole 49 gold necklaces valued at 988,250 baht.

Another employee identified as Mr. Sakarn said he had seen the thief leaving on a motorcycle with an unclear license plate and fleeing to a parking area. Mr. Sakarn immediately alerted the police.

After examining security cameras footage, officers tracked the suspect to a house in Tambon Banlao in Muang District. There, they arrested Mr. Sitthichok.

Police seized the motorcycle believed to have been used for the robbery and all the stolen gold necklaces found in his shoulder bag. Mr. Sitthichok was later taken to Muang Police Station.

During questioning, the suspect allegedly told investigators that he had robbed the store because he had no money to buy drugs.

Mr. Sitthichok was charged with theft and using a weapon to steal. On Wednesday, authorities took him to look for the hammer he allegedly used for a crime re-enactment.