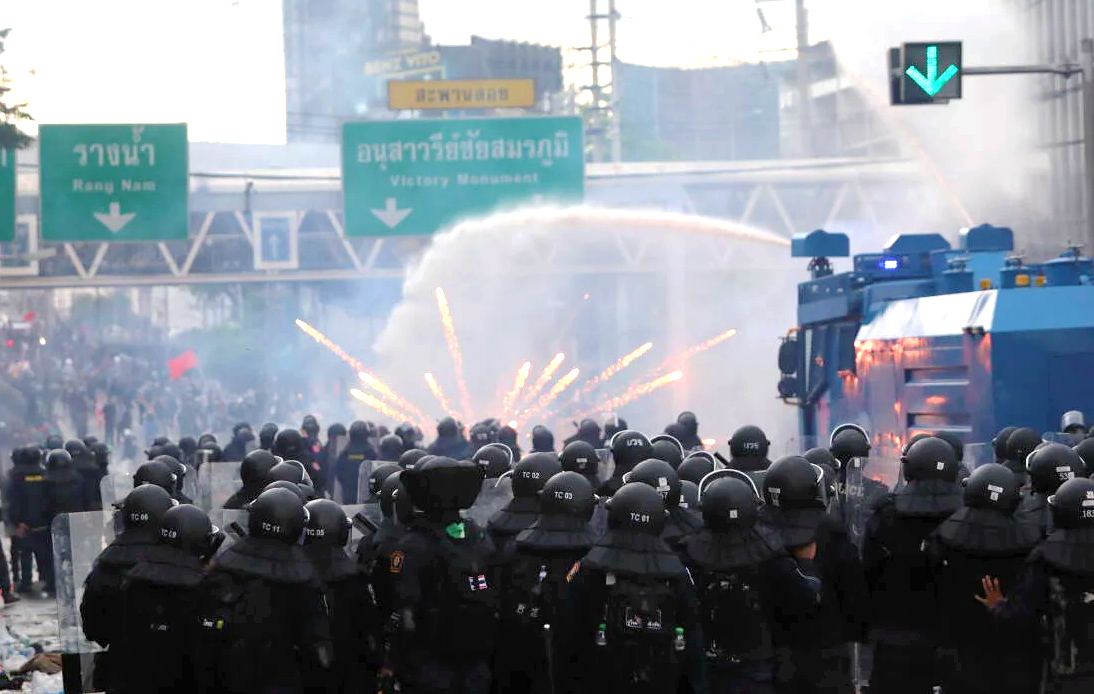 On Saturday, police fired water cannons, rubber bullets and tear gas at anti-government protesters who were forced to change their destination three times.

Redem (Restart Democracy)’s protesters initially planned to gather at the Democracy Monument at 2:00 p.m. yesterday, expecting to march to the Grand Palace.

Demonstrators also called on authorities to cut budgets for the palace and armed forces to allocate them to Covid-19 relief efforts.

Their third demand was to change the “tycoon” Covid-19 vaccine to the mRNA jab.

Hundreds of people arrived at the Democracy Monument around noon.

At 12:20 p.m., the police blocked traffic access to the area and asked the protesters to disperse.

Outside the Grand Palace, agents set up a container wall using decommissioned tanker cars from the Thailand State Railway.

Some protesters fired catapults and threw firecrackers at the police as they were pushed towards the Phan Fa Bridge.

Soon after, the Free Youth group posted on Facebook that the protest destination had been changed to the Government House.

The police also installed container walls there. Therefore, the protest organizers decided to change their destination to the Victory Monument.

A loudspeaker truck announced a march to the 11th Infantry Regiment, where Prime Minister Prayut resides.

Demonstrators reached the Victory Monument and headed for Vibhavadi Road, which leads to the army base, but the police blocked the traffic with barbed wire and stacked containers.

Agents lined up behind the barriers and forced anti-government protesters to return to the Victory Monument.

They also fired tear gas canisters at the Din Daeng intersection while trying to remove the containers around 3:30 p.m.

The police said they would use rubber bullets to disperse protesters and pushed them towards the Victory Monument with a water cannon.

Free Youth ended the rally at 5:30 p.m., but sporadic clashes between small protest groups and police officers continued into the evening.

Dozens of protesters were transported on motorcycles and ambulances. According to the Erawan Emergency Medical Center, at least two civilians and three agents were injured.