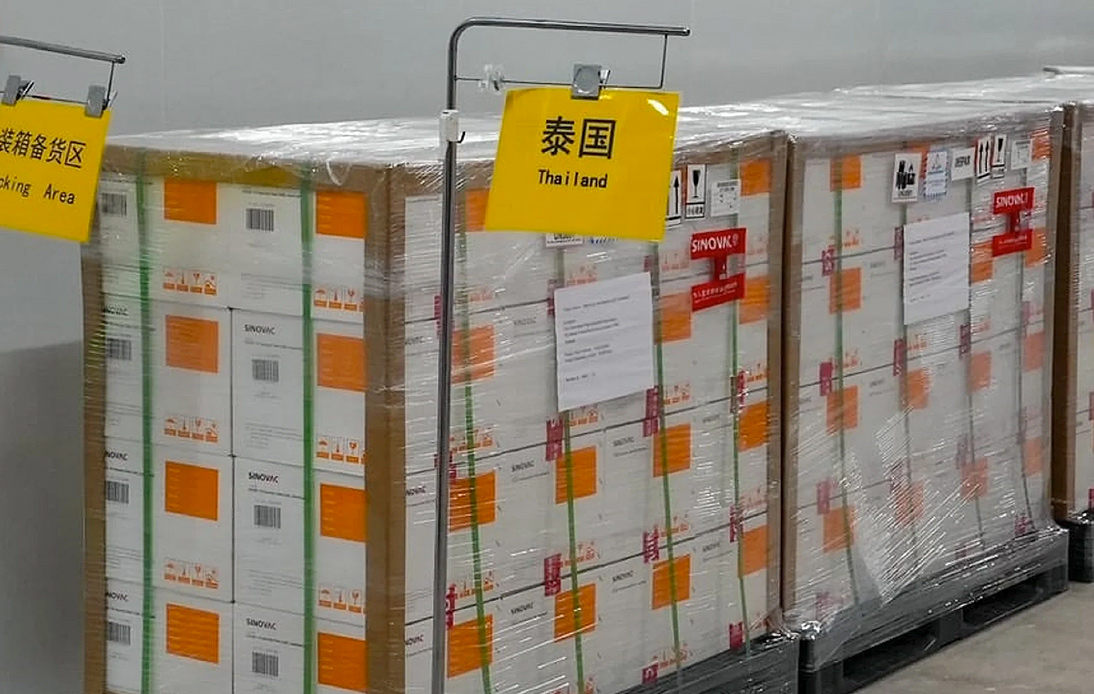 Public Health Minister Anutin Charnvirakul said on Sunday that the first lot of the vaccine produced by China’s Sinovac Biotech Co would arrive in Bangkok on Wednesday morning at Suvarnabhumi International Airport.

Moreover, to confirm that the arrival of the COVID-19 vaccine was on time, the minister showed a three-and-a-half-minute video to the media. The clip recorded Chinese workers moving stacks of boxes containing the vaccine from a warehouse to a container in which they will be transferred to Thailand by Thai Airways International.

The consignment has a message that reads: “Hello, Sinovac Vaccines. Have a safe flight. See you on Wednesday!”

It was reported that Thai Airways International would carry the first 200,000 doses and more doses will arrive until April, totaling two million to date. The Public Health Ministry had chosen the airline to transport the vaccine, THAI chairman ACM Chaiyapruk Didyasarin said on Tuesday.

He stated that Thai Airways had prepared for this important task.

The Thai Airways Airbus A350-900 that will carry the shipment was equipped with refrigerated containers that could store goods at temperatures ranging from -20°C to +20°C.

On the other hand, Prime Minister Prayut Chan-o-cha reportedly accepted an invitation to attend the event called: “COVID vaccines, restoring the Thai Smile” to take the delivery at the THAI warehouse on February 24th.

The inoculation process with the said vaccines would start as soon as possible.

According to the country’s well-known virologist Dr. Yong Poovorawan of Chulalongkorn University, vaccines should be given to high-risk groups as quickly as possible once Sinovac vaccines arrive in Thailand to stop the spread of the disease and gradually restore normalcy to boost the hard-hit economy.

He also tried to raise confidence about the Sinovac vaccine and others.

He also explained that its side effects are similar to those caused by the flu jab.