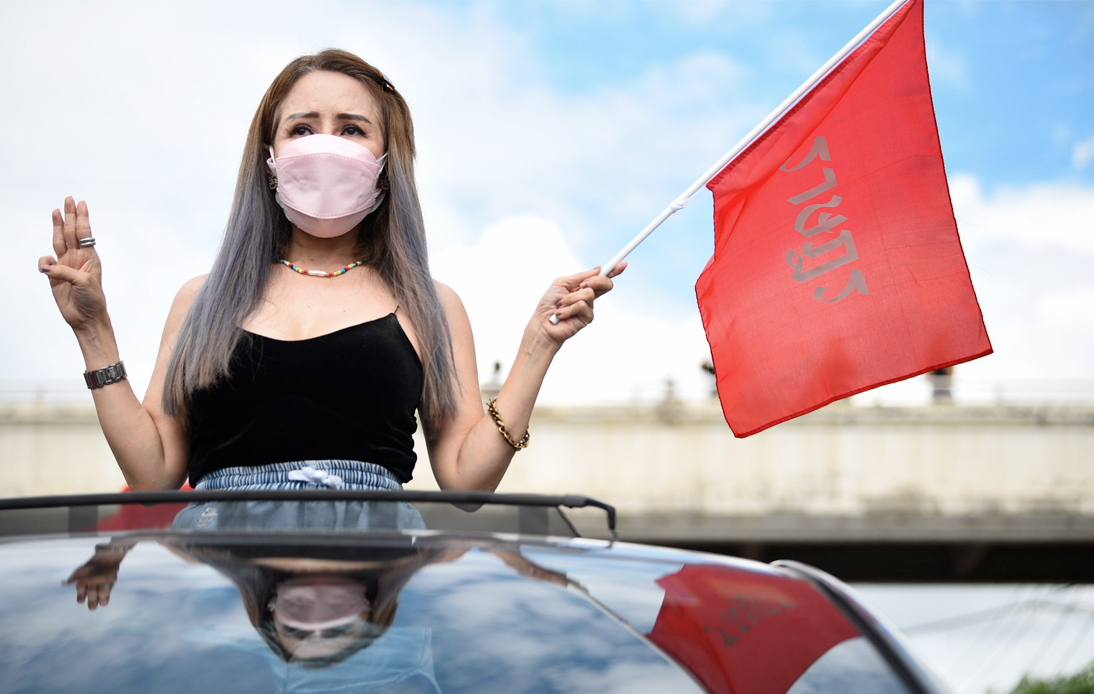 As demonstrators arrived at the protest place, veteran red-shirt leader Nattawut Saikuar announced he would lead a larger “car mob” rally from the Ratchaprasong intersection to Asok today. The activist urged motorists to join the protest and honk their horns upon arriving at the Asok intersection at around 4:00 pm.

Earlier, Nattawut said he had planned a much larger event, expecting to increase pressure on General Prayut to leave office and step down from his post as prime minister.

But he said the demonstrations would remain in Asok for a few more days.

Nattawut and fellow red-shirt activist Sombat Boonngam-anong have called rallies at the intersection. Their events had been held almost every afternoon from 4:00 pm to 8:00 pm parallel to demonstrations organized by young students and other pro-democracy activists.

On Sunday, Sombat wrote on Facebook that protesters would not be deterred by MPs’ vote in the Parliament on Saturday after most lawmakers voted to keep General Prayut and five other cabinet ministers in power.

His partner, Nattawut, echoed Sombat’s stance, saying: “We do not accept (the vote), and we will not give up.”

The Thalu Gas youth group, known for clashing with riot police in Din Daeng, also announced a demonstration in the area.

Protesters from all groups previously said they would continue protesting to demand the prime minister’s removal if he survived Saturday’s no-confidence vote.

With the second-fewest confidence votes, General Prayut emerged victorious after his third no-confidence debate despite rumors that some coalition lawmakers might break ranks sooner. The prime minister won 264-208 votes, with three abstentions.

In another Sunday development, Pol Maj Gen Piya Tawichai, spokesman for the Metropolitan Police Bureau, said authorities were still awaiting the results and reports from an autopsy on a man who died last Saturday night.

The victim passed away after his motorcycle crashed into a shipping container near the Parliament.

Police regularly make use of containers to block protesters demonstrating outside the Parliament.

However, Pol Maj Gen Piya stated that the case was not related to any anti-government protest.