Thai Citizens Sign Up at Ukraine Embassy To Fight in War 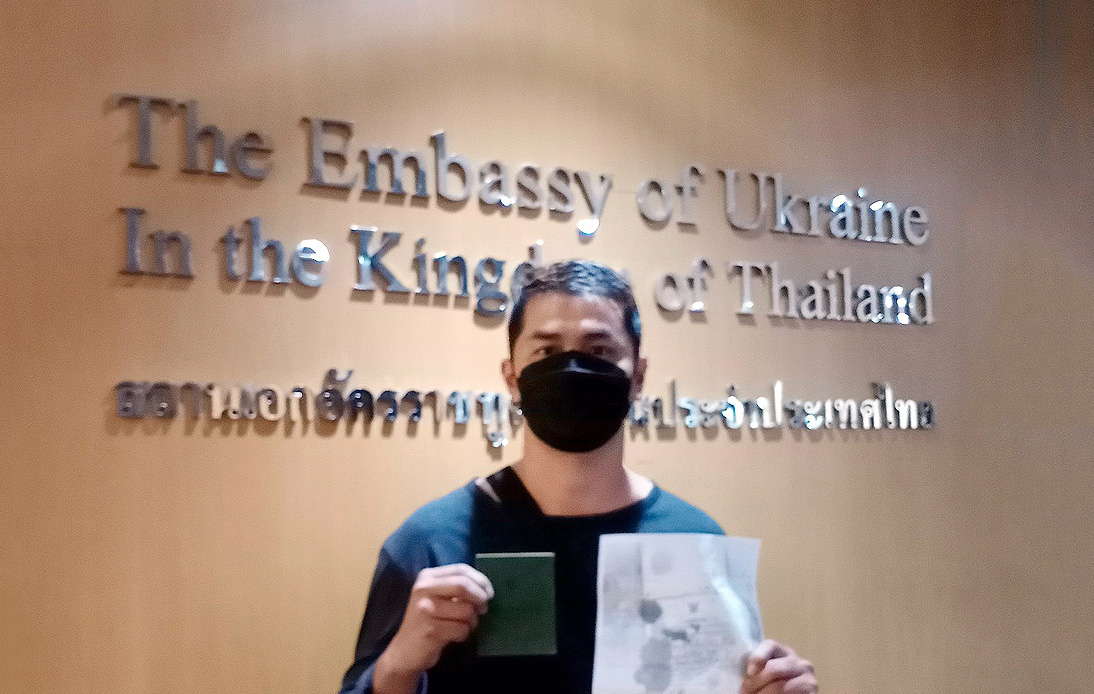 Thailand isn’t exactly around the corner from Ukraine, so on paper it certainly isn’t an obvious place for military recruitment as the country attempts to build an international volunteer force to take on Russian troops.

However, one week into the invasion ordered by Vladimir Putin, and there are a number of Thai citizens who have been answering the call from Ukrainian authorities to apply to join the fight against Russia.

On Thursday, a group of six young Thais spoke with gathered reporters at All Season’s Place, Bangkok, where the Embassy of Ukraine in Thailand is located, as they met with officials to sign up for the cause.

They spoke without revealing their names. However one was later named on Twitter as being a well-known activist, who took part in many of the most recent pro-democracy protests in Bangkok.

The group of six men went along to the embassy to talk with one of the staff members, attending a scheduled meeting having registered on a website that collects data on possible recruits.

It is not known if the activist named on Twitter is the man who posed above for media photos at the Ukrainian Embassy. Users on the social media platform gave some insight by translating a radio interview, originally in Thai language.

Twitter users said that the activist is named Chanaphong, and he had expressed his concern for the people of Ukraine in light of reported Russian attacks on civilians. 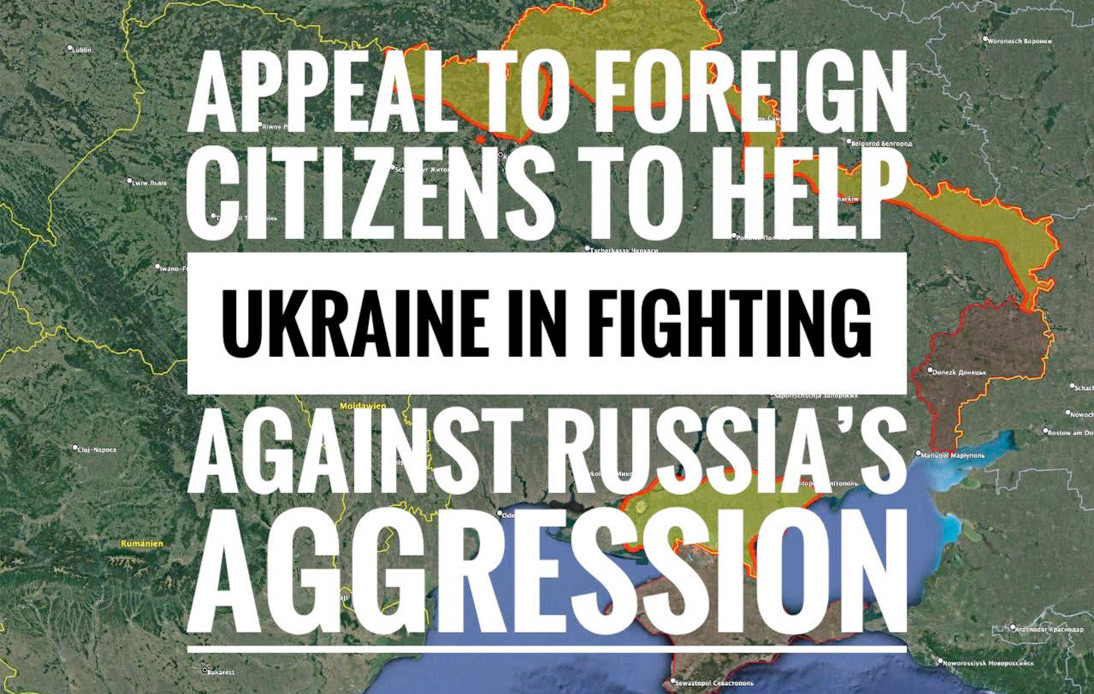 “Ukrainians are fighting for democracy too. A superpower and a tyrant has invaded them, so I asked myself what I could do to help,” Chanaphong said in the interview.

A Thai-language online organization garnered over 2,000 names of Thais with an interest in volunteering for Ukraine in a single day this week, according to the group’s organiser.

The Ukrainian Embassy in Bangkok did not officially respond to request for further information from local and international media outlets.

Their staff are examining candidates, who are required to provide documentation. This includes proof of military training and a clean criminal record, according to the person who met with the group, asking not to be identified.

An embassy employee also advised interested volunteers to apply via email rather than calling or visiting the embassy itself.

Ratchada Thanadirek, a government spokeswoman, said that while there is no legislation prohibiting Thai nationals from joining foreign volunteer forces, they should be aware of the extreme danger they may face as Russian soldiers target cities all over the country with the heavy weaponry at their disposal.

The Ukraine Embassy in Thailand has set up the bank account below for anyone in the Kingdom wishing to donate money to support the nation at this time. 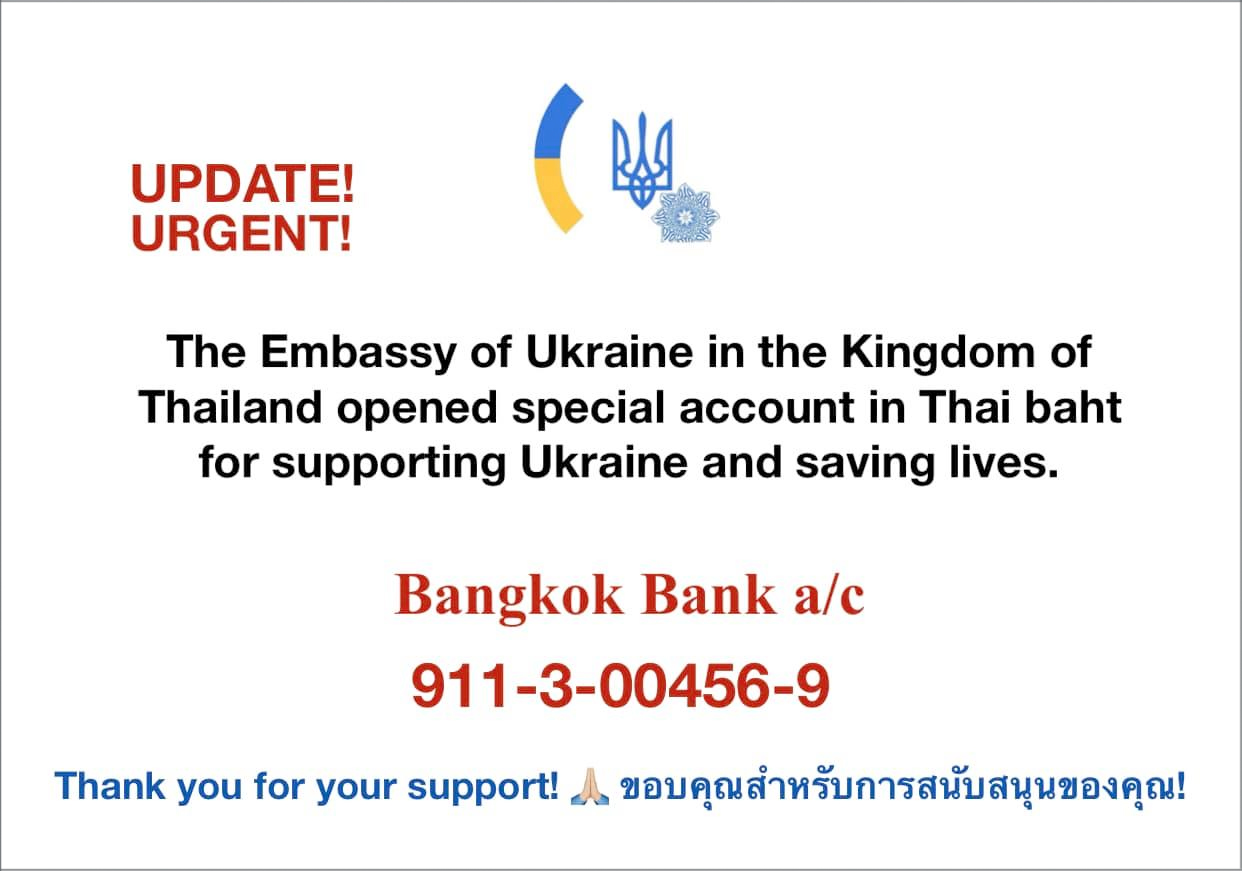 In the audio interview, Chanaphong said that he had been working as a private security consultant since finishing his required military duty.

He commented that two years in the air force had prepared him to help the Ukrainians in evacuating citizens, guarding locations, and securing supply lines: “Other men and I have some basic firearms training, therefore I believe I may be effective in saving the Ukrainians from this crisis.”

He also went on to say that his more recent encounters with Thai riot police during anti-government demonstrations might potentially be useful.

“We need to stop carrying bottle bombs and start carrying weapons,” he remarked.

Thailand was one of the 141 nations that voted at the United Nations General Assembly on Wednesday to reprimand Russia for invading Ukraine, urging them to cease fighting and withdraw its armed soldiers. Since the Russian assault began on February 24, Prime Minister Prayut Chan-o-cha has taken a neutral position.

It is unclear if Chanaphong and the others are going to be allowed into Ukraine’s “foreign legion” but they’ve already started preparing. He revealed that he had been stepping up his running routine this week to ensure he is in top physical condition for what may come.

“We fight for democracy here. They fight for their democracy there,” he commented. “We are like friends. It’s the same feeling, the same ideology.”