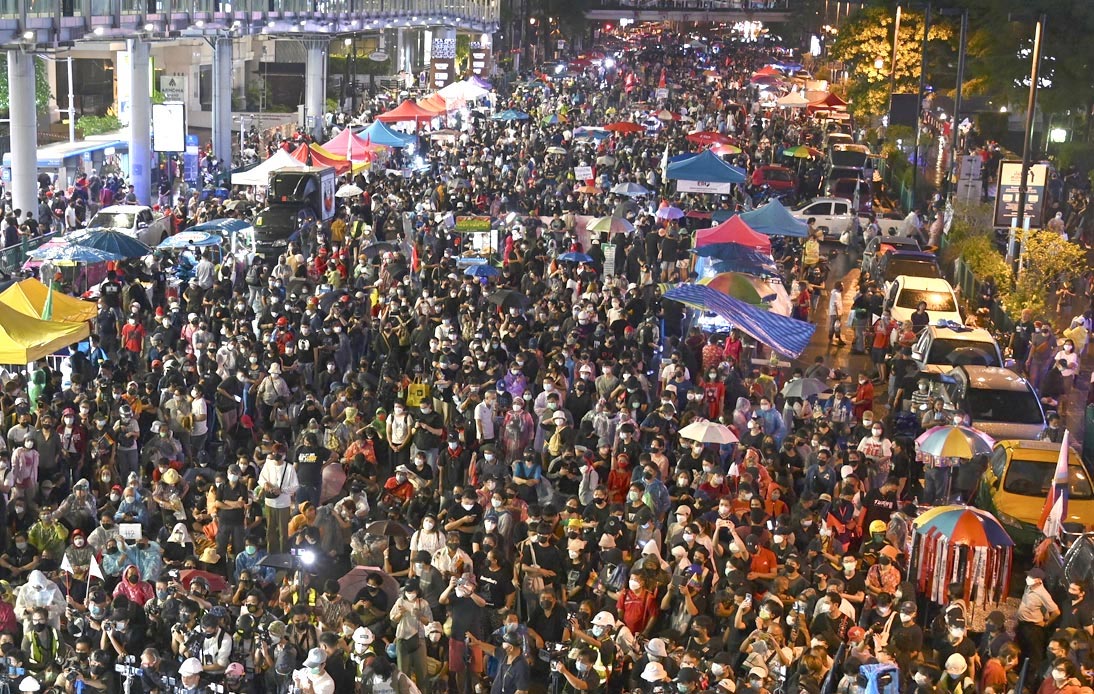 The rally’s main objective was to call on the government to repeal Section 112, a draconian rule that punishes those criticizing the king.

The global rights watchdog Amnesty International collected 10,000 signatures, demanding Section 112’s change and the release of prominent activists who have been prosecuted under the lese majesty law. Key protest figures such as Arnon Nampa, Parit “Penguin” Chiwarak and Panupong Jadnok are in pre-trial detention and face lese majesty charges.

The petition will be delivered to Prime Minister Prayut Chan-o-cha at Government House today.

A man wearing a Squid Game costume joined the rally, walking down the street while holding up a sign that read: “Abolish 112. Abolish fear. Abolish indifference. Abolish hopelessness.”

Before the demonstration started around 04:00 p.m., the protest group Vivo Guard reached an agreement with the police. As demonstrators did not march towards the Royal Police Office near the Ratchaprasong intersection, officers did not force them to disperse.

Besides demanding the lèse majesté law’s repeal, this weekend’s massive protest aimed to unite protest groups all Thai and ask authorities for more equitable access to Covid-19 vaccines, he said.

The leader said organizing demonstrations had been a challenge, as all protest groups have different tactics and objectives. Furthermore, some people who agree with the demonstrations’ purposes fear turning because of the government’s legal threats, he added.

However, Sunday’s rally brought together protesters from different groups and generations of activists, including prominent Red Shirt leader Anurak Janetawanich, 53.