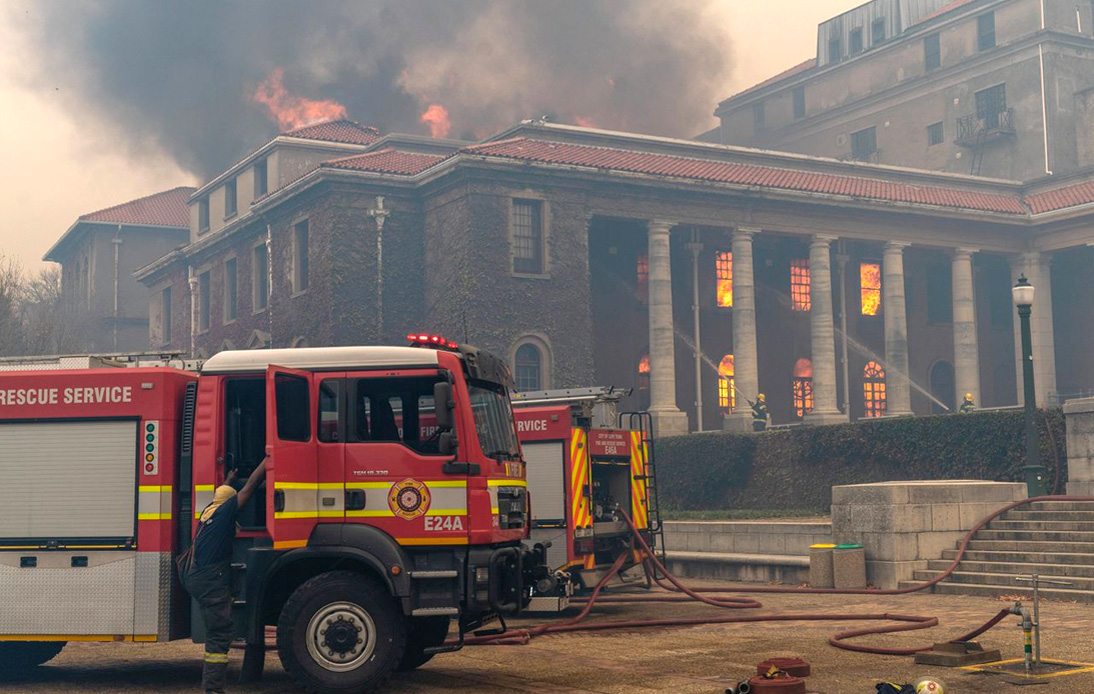 An “out of control” fire on the slopes of Cape Town’s Table Mountain spread to the University of Cape Town on Sunday, burning at least two floors of the historic Campus library.

The Jagger Library, which houses considerable book collections, was lit by orange flames as the fire forced students to evacuate the institute.

Firefighters sprayed jets of water to put out the fire, but a nearby historic windmill and other campus buildings also burned. On the slopes of Table Mountain, the wind spread flames through dry brush, burning part of the Rhodes Memorial restaurant, Cape Town media informed.

The fire in the national park broke out on Sunday, prompting hikers to evacuate from the city’s most famous landmark, South African officials said.

Soon after, a press release shared by a Twitter account associated with the park said that more than 120 firefighters and emergency personnel were deployed to Table Mountain National Park and the university campus to fight the massive blaze.

“The fire created its own wind that further increased the rate of spread. The excessive amount of smoke and related updrafts made it impossible for the aerial support to slow the rate of spread,” the park added.

The Cape Town fire and rescue department said a firefighter was injured and was being treated at the hospital.

Earlier, a woman in the park posted a video on Twitter showing a plume of smoke in the background and said she was “trying to escape the fire.” In a later tweet, Lisette Lombard stated that she was safe but her car had been destroyed.

“Never have I experienced a fire that spread so unpredictably fast. I have so much respect for our firefighters,” she added.

Jermaine Carelse, a spokesperson for Cape Town Fire and Rescue, told the media that the cause of the fire was unknown. The fire spread from the vicinity of Philip Kgosana Drive, which borders the national park, to the Rhodes Monument and continued to the University of Cape Town buildings, the spokesperson added.

Besides, Charlotte Powell, a spokeswoman for the city’s disaster risk management center, warned residents to be alert.

“At this stage, there’s no cause to evacuate, but we ask that residents adhere to the following: close all windows to prevent draft and reduce heat, damp down your garden using a hose or irrigation system,” Ms. Powell added.