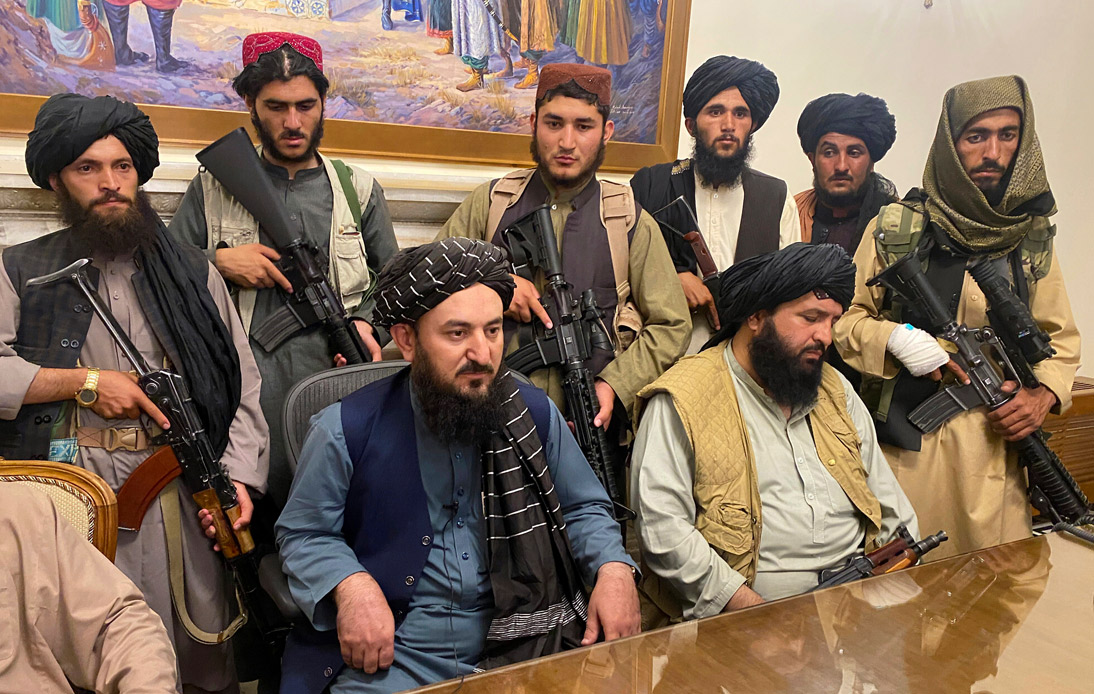 The Taliban has claimed victory, stating “the war is over,” after Kabul fell to the Islamist group.

Taliban soldiers seized control of the presidential palace in the Afghan capital after the government collapsed and President Ashraf Ghani fled the country, ending the 20-year US presence in the country.

Qatari media outlet Al-Jazeera posted photos of Taliban soldiers around a desk in the presidential palace after arriving in the capital early Sunday.

Heavily armed Taliban militants fanned out into Kabul after taking over key cities during the weekend.

As the Taliban’s control over Afghanistan solidified, the US government rushed to evacuate the remaining personnel and took down its flag from the US embassy in Kabul.

Other Western countries also rushed to evacuate their citizens, with some closing their embassies altogether, saying the security situation was changing rapidly.

People sought refuge amid the fighting in Kabul, where scenes of panic were reported.

Both locals and foreign nationals have tried to escape, with hundreds running to planes at the capital’s international airport.

Helicopters raced overhead throughout the day while evacuating the US embassy’s staff.

Kabul was covered in smoke as diplomatic personnel destroyed important documents. Shots were also heard at the city’s airport.

The Associated Press reported that the militants would hold talks to guarantee an “open, including Islamic government.”

Besides, a Taliban spokesman told the media that there would be no revenge against the Afghans.

Earlier, another spokesman said the Taliban would announce the “Islamic Emirate of Afghanistan’s restoration” from the palace. It was the country’s official name before Taliban militants were toppled by US-led forces following the 9/11 attacks.

After US Defense Secretary Lloyd Austin ordered to deploy another 1,000 troops to Afghanistan, the US troops expected in the country increased to 6,000.

The United States strengthened its military posture in Afghanistan as the situation deteriorated and Afghan officials handed over the Presidential Palace in Kabul to the Taliban.

Officials said talks for a “peaceful transition” had been held.

The government’s acting interior minister, Abdul Sattar Mirzakawal, said earlier that power would be handed over to a transitional administration.

However, two Taliban officials told Reuters there would be no transitional government as they expected a full power handover.

Republican lawmakers have criticized Biden for the US withdrawal. But the US president argued that he could not justify an “endless American presence in the middle of another country’s civil conflict.”

Meanwhile, Russia announced that it plans to convene an emergency meeting of the UN Security Council to discuss Afghanistan’s situation.

Russia added that it would not close its embassy because the Taliban had provided its government with security assurances.