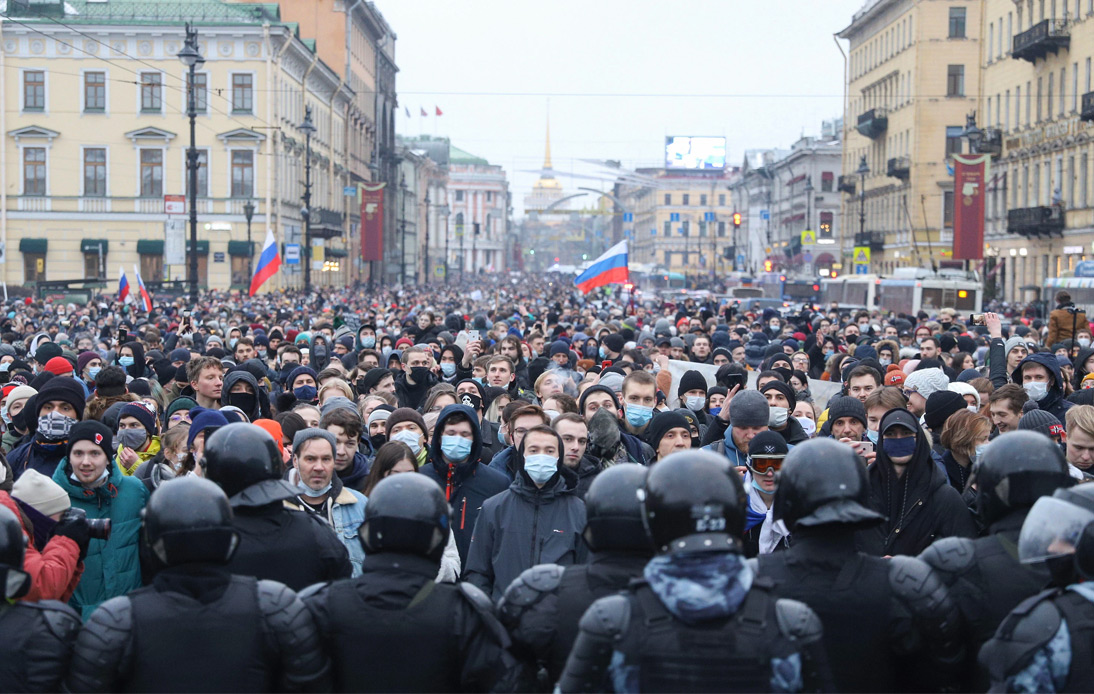 The number of protesters arrested in the last 24 hours was the highest in a decade.

According to a monitoring group, more than 5,000 people have been detained, with more than 1,600 in Moscow and 1,122 in St. Petersburg. There had not been such a high number of arrests since OVD-Info, an independent monitoring site, began recording such figures in 2011.

In the capital, authorities ordered the city center to be blocked and metro stations to close.

Where were the protests?

Early Sunday, Navalny supporters announced that they had planned protests in at least 120 cities across the country.

The protesters tried to reach the Matrosskaya Tishina detention center, where the opposition leader is held in custody. However, the local police closed each of the metro stops leading to the detention center located in the Sokolniki neighborhood, northeast of the city.

There was also a mass gathering in the central square of Putin’s home city St. Petersburg, where protesters chanted “Down with the Tsar.”

The media also reported protests in Eastern Russia. In the Siberian city of Novosibirsk, at least 2,000 people marched demanding freedom and saying, “Putin is a thief.” There were also protests in Yakutsk, where the temperature was -40o C.

Another 1,000 people reportedly demonstrated in Omsk, Siberia, and another 7,000 in Yekaterinburg, Urals region.

However, police said the protests were illegal as they could spread the virus.

According to OVD-Info, the police detained more than 5,000 people in protests in 86 cities across Russia. Yulia Navalnaya, Navalny’s wife, was among those detained, but she was later released.

Later, Navalny’s campaign headquarters in Moscow announced the end of the protests.

It also asked supporters to attend a demonstration Tuesday at a Moscow court where the ruling on Navalny’s arrest will be handed down.

Why are the Russians protesting?

The latest protests in Russia have supported opposition leader Alexei Navalny, who was jailed upon his return to the country a few months after recovering from a poisoning that he blames on Russia’s security agents.

Authorities allege that Navalny was required to report to the police regularly over a conviction for embezzlement.

However, Navalny says that the authorities had allowed him to travel to Berlin to receive treatment for the poisoning he suffered in August last year, denouncing his arrest as “blatantly illegal.”