Eminem Serves Up Spaghetti at His New Detroit Restaurant 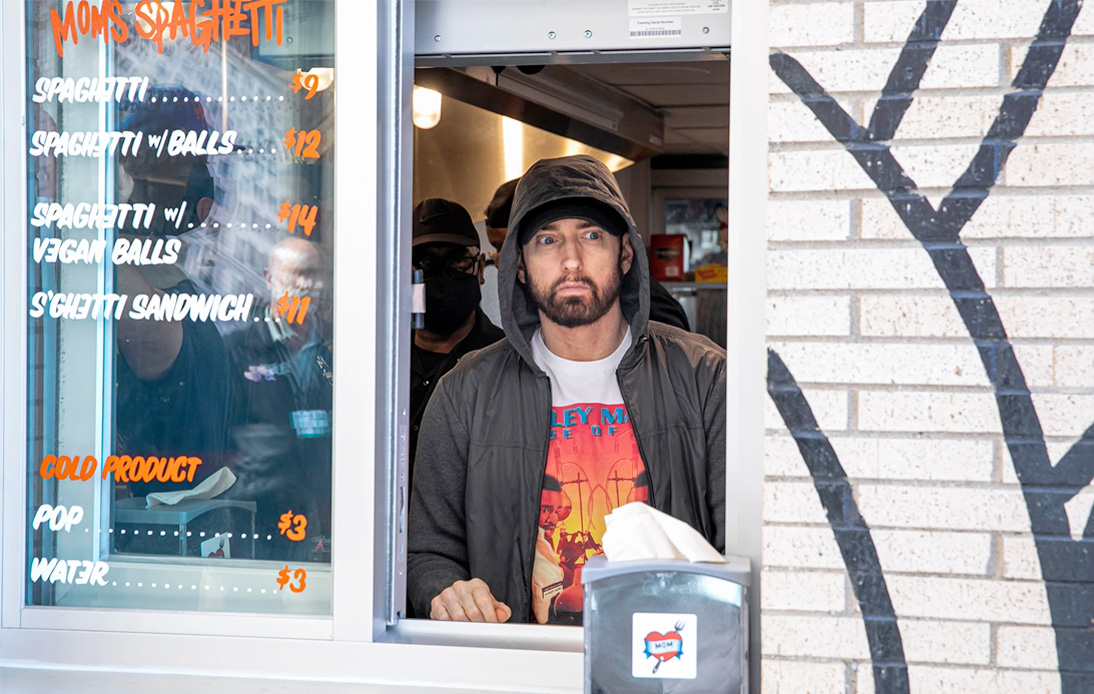 On Wednesday, famous rapper Eminem surprised fans and guests by serving up pasta himself during his new Mom’s Spaghetti restaurant, located in downtown Detroit, grand opening.

The singer was not expected to be on the site, but he appeared at the serving window shortly after arriving in a car and served some customers. Em was recognized quickly by his fans, who shared some photos of him serving spaghetti, meatballs, and other dishes from his Italian menu.

Eminem, whose real name is Marshall Bruce Mathers III, named his restaurant in a nod to a line from his 2002 hit Lose Yourself.

The restaurant, located on Woodward Avenue, has limited seating. However, customers were asked to place their orders through the walk-up window.

Hungry visitors who opted for that option on Wednesday were greeted by the world-famous rapper, who not only delivered meals to customers but also posed for some selfies with his fans.

In a promo video shared on the Internet, the restaurant proclaims: “Mom’s Spaghetti – it’s all ready.”

Eminem -known for performing hip hop hits like Rap God, The Real Slim Shady, and Love the Way You Lie- started experimenting with the eatery as a pop-up restaurant five years ago. Its inauguration marked another big achievement for the multifaceted singer, who has also won Oscars and Grammys.

Photos from the opening event showed crowds lining up to enter. Many visitors were also seen wearing T-shirts and sweaters with the rap star’s face splattered across the front.

Local media reported that fans arrived at the venue at around 10:00 a.m., seven hours before the opening, previously announced to be held at 5:00 p.m.

A fan told Detroit News on Wednesday: “This has been my dream my whole life,” adding that Eminem had signed their spaghetti container.

Another fan told the media they had traveled 40 minutes from Monroe to attend the opening. Seeing the celebrity “made the experience,” the fan said.

Earlier this week, Eminem tweeted to his 22.5 million followers: “Moms spaghetti it’s alllllll ready Detroit! Come thru Wednesday,” but did not announce he would be there.