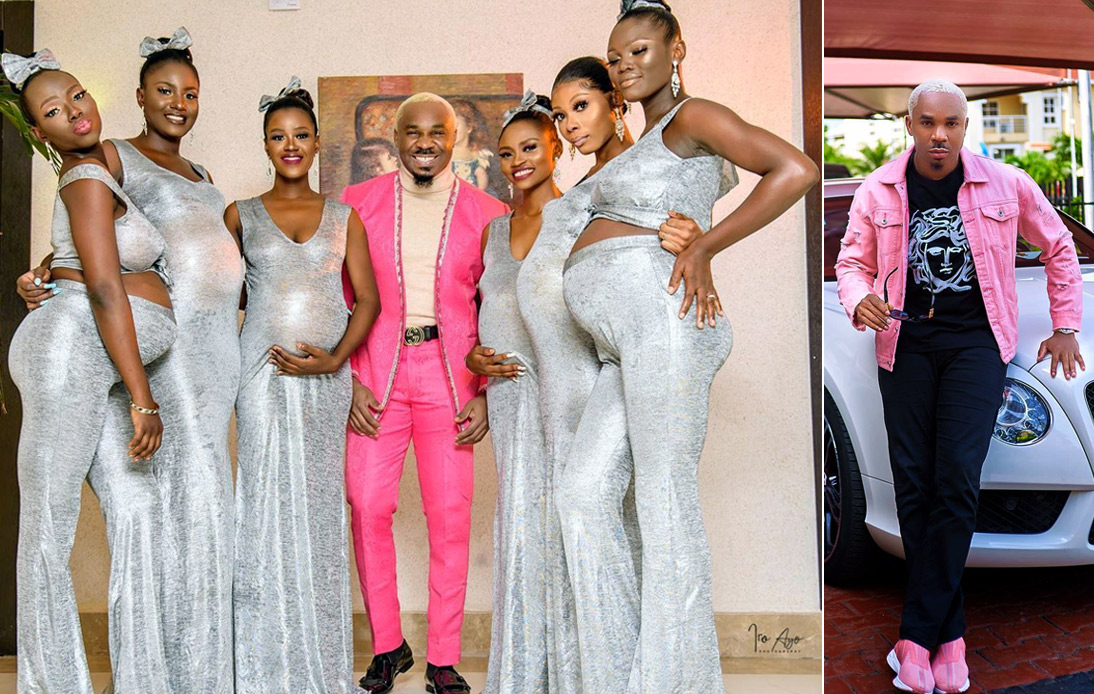 Pretty Mike, known for being a Nigerian playboy and an online personality, has caused controversy and made international headlines after appearing at a society wedding with six pregnant women, claiming he was the father of all their babies.

The flamboyant man, whose real name is Mike Eze-Nwalie Nwogu, is also known as the King of Stunts and has a long history of controversy wherever he has been to.

In a striking pink suit, Pretty Mike kissed the six silver-clad women and rubbed their bellies at the wedding of actor Williams Uchembo, who is his friend.

He also posted a photo on his Instagram and wrote in the caption: “PM and his 6 Baby Mothers to be… no film trick, we are just living our best life #ABetterTime #HappyHome #Familyiseverything”.

It is the first time that one of his scandalous acts has made world news. However, the owner of the Club de Lagos has caused controversy dozens of times in his country.

He was once arrested for parading through the Nigerian capital with girls tied to dog chains.

The 33-year-old has 305,000 followers on Facebook, and when he’s not trying to get noticed with some of his quirky stunts, he shares his crazy views on sex or gives advice on “living life.”

Pretty Mike, who runs Lagos’ nightspot Club Uno, also often flaunts his wealth by wearing thousands of dollars’ worth of Gucci, Versace and Dolce and Gabbana clothing and driving a fleet of supercars.

Mike first gained notoriety in Nigeria in 2016 when he began parading with his “human cubs” and married several beautiful girls with dog chains.

Since he did not gain the level of attention he wanted, he began to walk with them through Lagos’s streets until people noticed and took to social media to criticize him for dehumanizing women.

He also drew Nigerians’ ire by naming his dog Toke Makinwa after a popular TV presenter and influencer.

In 2017, although no actual crime had been committed, the police arrested Mike on the Nigerian government’s orders.

But he was released after agreeing to sign an official statement promising to stop whatever act of putting girls on a leash or any other degrading treatment to ladies and guys. He also pledged to issue a letter of apology to the public from all his social media platforms.

Women are still part of his scandalous events, although they no longer appear with dog collars.

“I am one of the biggest lovers of women in this society. The ladies can attest to it,” he said in an interview on Nigerian TV.

He claimed he used the dog leash trick to get attention. “Everybody loves attention; even God in Heaven is the biggest lover of attention. But I love women, and they know it,” he added.