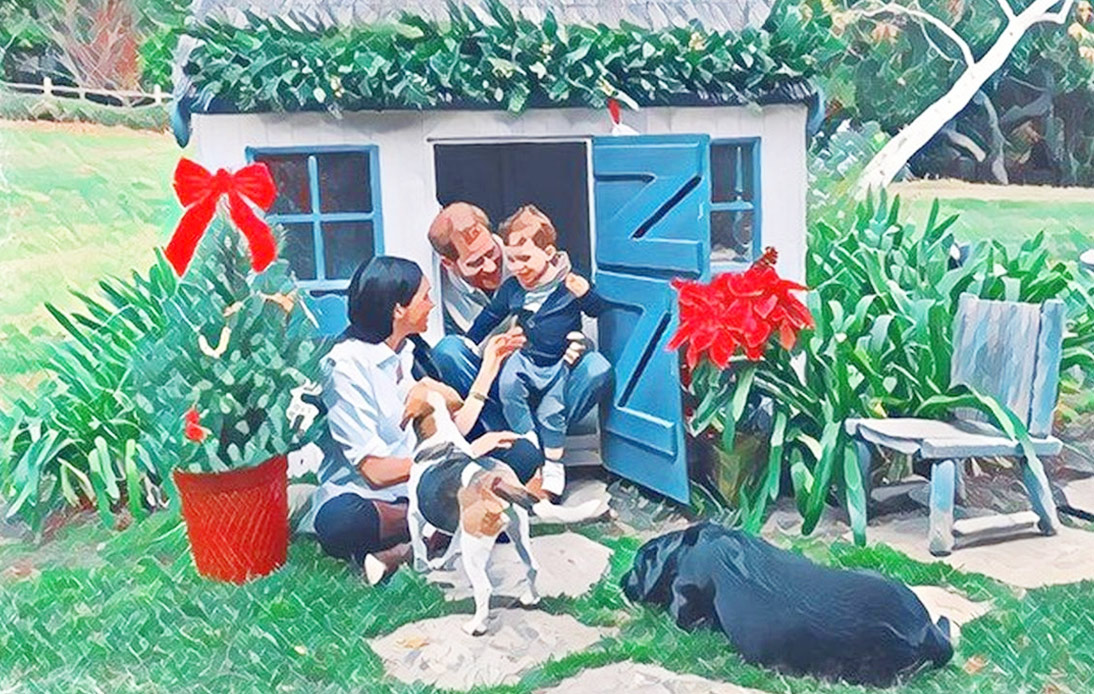 Meghan Markle and Prince Harry have shared their first American Christmas card of their holidays in Montecito, California.

The card shows an illustration of a photo taken by Meghan’s mom, Doria Ragland. Mayhew, Meghan’s animal welfare organization patronage in the UK, released it.

The couple appears in the front and center of the card.

Their 19-month-old son Archie, who has inherited his dad’s red hair, appeared alongside his parents and the family’s two lovely dogs called Pula and Guy.

“Wishing you a very Merry Christmas and a Happy New Year,” the card states.

A spokesperson for the Duke and Duchess of Sussex said that the original photo of the family was taken at their home earlier this month by the Duchess’s mother. “The small Christmas tree, including the homemade ornaments and other decorations, were selected by Archie, and the tree will be replanted after the holidays,” the spokesperson added.

Meghan and Harry’s backyard and Archie’s special playhouse could also be seen in the card.

“Archie is really happy, and he has space to run free. The house came with a play structure that he’ll be climbing in no time,” a source previously told People.

The card also confirmed that Meghan’s family made a personal donation to Mayhew, which will support their work at helping animals and communities.

Meghan wrote in the card: “This year we, as a family, have made donations to several charities with you in mind”.

“From a local California organization that helps families transition out of homelessness, to two of our U.K. patronages: one that supports animal and community welfare, and the other, a memorial fund for a cherished friend that helps to educate children and fight poverty in Uganda, we have honoured their work on behalf of all of us,” she added.

Meghan and Harry shared their first Christmas card with their child last year when being in Vancouver Island in Canada for the holiday season. They were making preparations to step down from their role as senior working royals.

In 2018, when they were newlyweds, their first Christmas card as a couple was released -it had a snap from their royal wedding reception at Frogmore House.