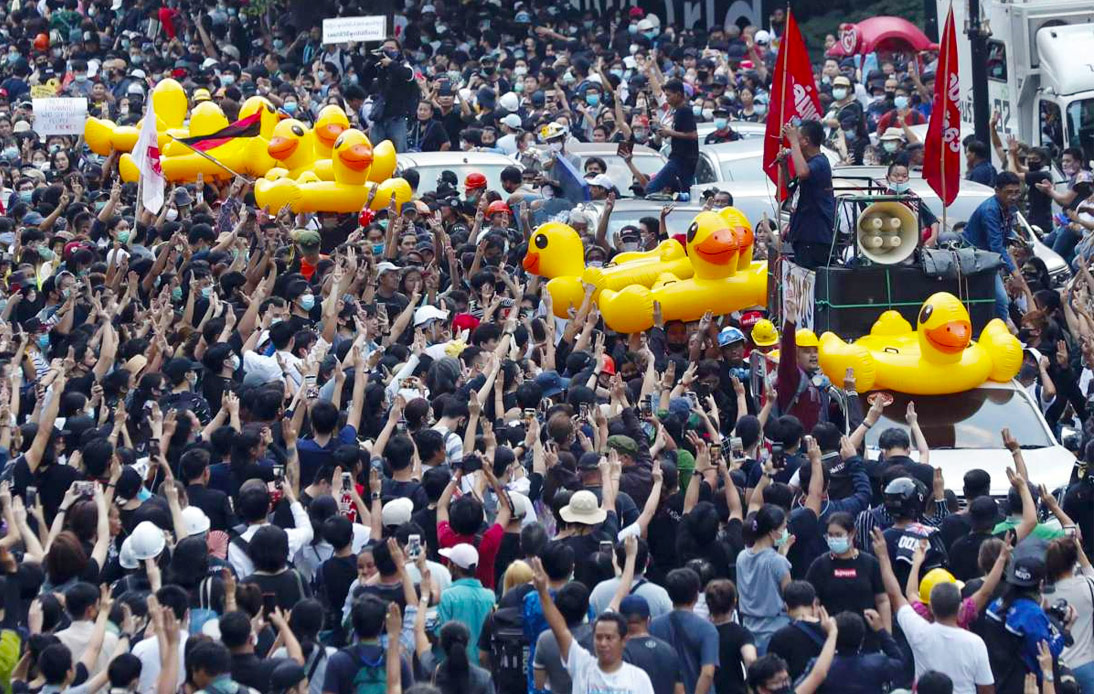 Anti-government protesters gathered outside Bangkok’s Ratchaprasong intersection around 8:30 p.m. Wednesday, but they peacefully suspended despite the irritation caused by the rejection of their requests for amendments to the constitution.

The demonstrators sprayed water at the Royal Thai Police headquarters and left their mark in a blaze of color on the compound’s fence and some nearby roads before leaving the area.

On Wednesday afternoon, the demonstrators began gathering at the Ratchaprasong intersection in central Bangkok, next to the Royal Thai Police headquarters.

The protesters used spray to paint the police agency badge.

Police previously warned that they would give a decisive response to any attempt to bypass their headquarters.

Pol Maj Gen Yingyos Thepchamnong, a spokesman for the Royal Thai Police Office, announced Wednesday morning that the protesters planned to gather at the intersection and stated they had plans to move to the police headquarters.

He also said that riot police were on standby at the scene to deal with any situation.

“Any action that causes damage to government property and barricades is considered a violation of the law… If trespassers destroy government property, we will have to take action in accordance with our authority and duty. I emphasize this,” he said.

Moreover, the traffic police advised motorists to avoid the roads near the Ratchaprasong intersection starting at 2:00 p.m.

Such warning covered the Ratchadamri, Rama I, and Ploenchit roads.

He also said expensive equipment was ripped off the high-tech water cannon trucks. Besides, sand, metal, and food scraps were put in their engines.

Pol Maj Gen Yingyos that damaging the vehicles would not end the political conflict as they were purchased with taxpayer money.

Furthermore, he assured that the police would continue to enforce the law.

It has been a month full of protests. Yesterday’s ended up being quite violent, and 18 people were injured, so the authorities expect to keep the situation under control.