District Warns Drivers Could Be Jailed for Hitting Wild Elephants 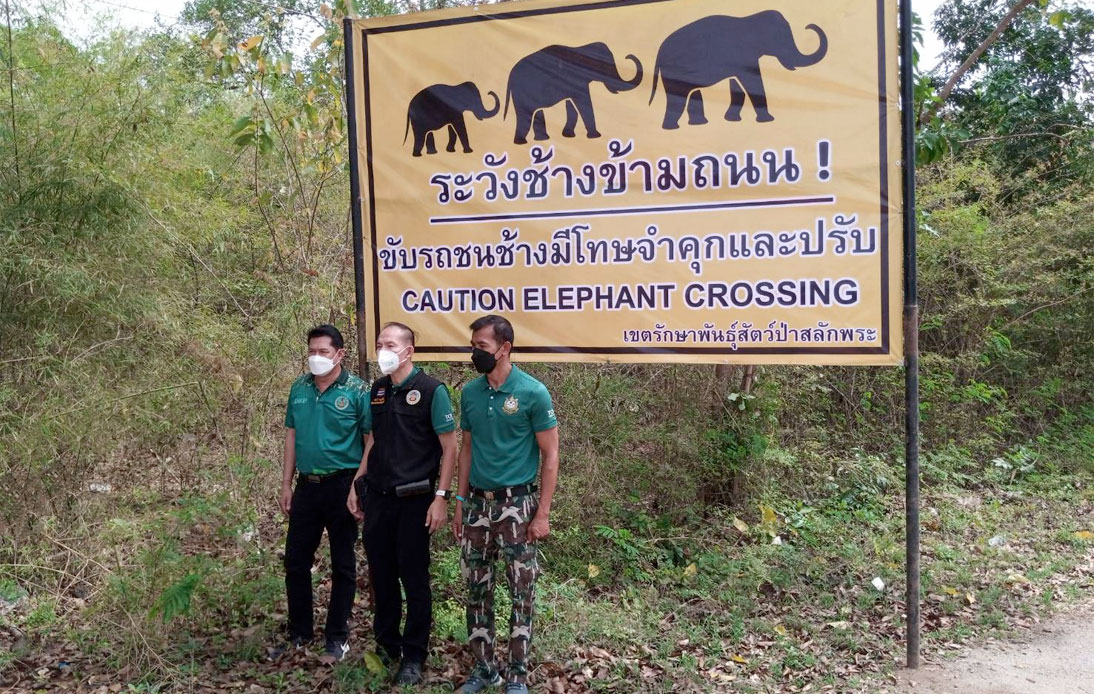 Wildlife authorities have warned that motorists could face up to 10 years in prison and be fined up to one million baht if they hit and injure a wild elephant on the road favored by the giant animals in the Muang Kanchanaburi district.

The warning came after wild elephants were killed or injured in recent collisions.

Muang Kanchanaburi officials have vowed to enforce the sanctions to ensure the elephants’ safety. On Thursday, Paitoon Inthabut, chief of Salak Phra Wildlife Sanctuary, said 35 signs warning about wild elephants crossing Highway 1399 had been posted along the road.

Authorities also posted warning signs for a 60 km/h speed limit with information on the fines and prison sentences that people who run over a wild elephant can face.

The giant animals regularly cross the 15-kilometer section between Tambon Wang Dong and Tambon Chang Sadao as they move from one feeding area to another.

Mr. Paitoon stated that the posted warnings could prevent motorists from making the excuse that they were unaware of the wild elephants’ presence along the highway or legal penalties for injuring or killing one.

However, several cases of vehicles colliding with protected animals have been reported in the past weeks. In response, the Ministry of Natural Resources and Environment ordered the wildlife sanctuary office to step up measures to protect animals in the area.

“If motorists break the speed limit and hit a wild elephant, they will be prosecuted,” Mr. Paitoon stated.

In addition to the fine and prison sentence, the vehicle’s driver must also pay hundreds of thousands of baht in compensation for each harmed elephant. Also, motorists who fail to help injured wild elephants in a hit-and-run case can face up to three months in prison and/or a 2,000-10,000 baht fine under the Land Traffic Act,  Mr. Paitoon went on.

The new measures come after a pickup truck collided with a wild elephant on the Wang Dong Tambon road on January 9. The mature bull aged around 30 was found dead in the jungle two days later. A similar incident was reported on February 1.