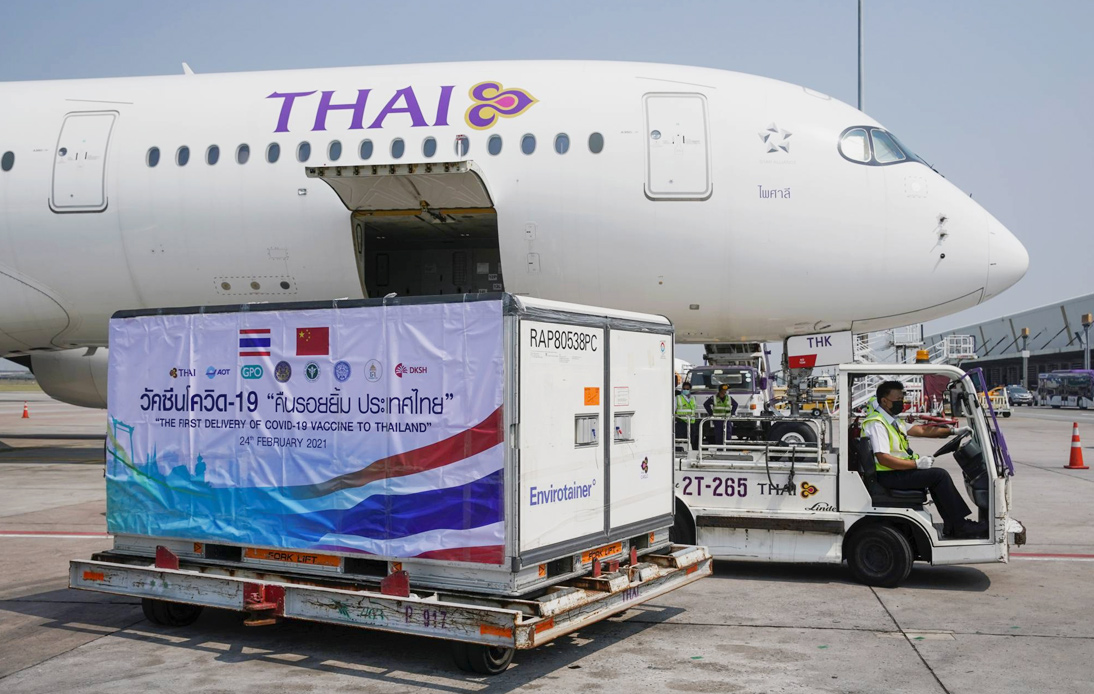 The first batch of the vaccine from the China-based firm Sinovac arrived in Thailand as expected.

At 10:05 a.m. Prayut Chan-o-cha and Anutin Charnvirakul received 200,000 doses of the vaccine at Suvarnabhumi Airport.

Prime Minister Prayut Chan-o-cha expressed gratitude to China for the timely delivery of the vaccines and said: “Today is a historic day with the reception of the first lot of vaccine.”

He also added: “Without any unexpected problems, subsequent lots will arrive as planned.”

The DKHS Vaccine Store in the Department of Medical Sciences will be in charge of storing the vaccines.

It was reported that the shot would undergo a three-day test before the first batch is sent to the Bamrasnaradura Infectious Diseases Institute.

Mr. Anutin will be reportedly the first person to receive the Sinovac shot.

Reports said that Mr. Anutin would get the jab at the institute on February 27 at 9:00 a.m. In turn, Gen Prayut will reportedly receive the shot from AstraZeneca, which is expected to arrive in Thailand later this afternoon.

The Charge d’Affaires of the Chinese Embassy, Yang Xin, was also at the event.

He stated that the first batch of Sinovac vaccines was purchased for commercial use and called the vaccines’ arrival “another major progress in bilateral anti-pandemic cooperation.” Yang Xin also said that he hoped that Sinovac vaccines would play an active role in Thailand’s fight against the coronavirus.

Authorities previously explained that the first batch of Sinovac vaccines would be distributed to 13 provinces, including Bangkok.

The Chinese pharmaceutical firm’s shots will be administered to people in groups at risk, including medical workers, personnel in close contact with patients, and people diagnosed with chronic diseases.

Eight hundred thousand doses are scheduled to arrive in Thailand in March ahead of the third batch of one million doses.

The government has also approved the use of the AstraZeneca vaccine for its national immunization program.

The national plan will be divided into three stages, and the Sinovac vaccine will be used from the first one.