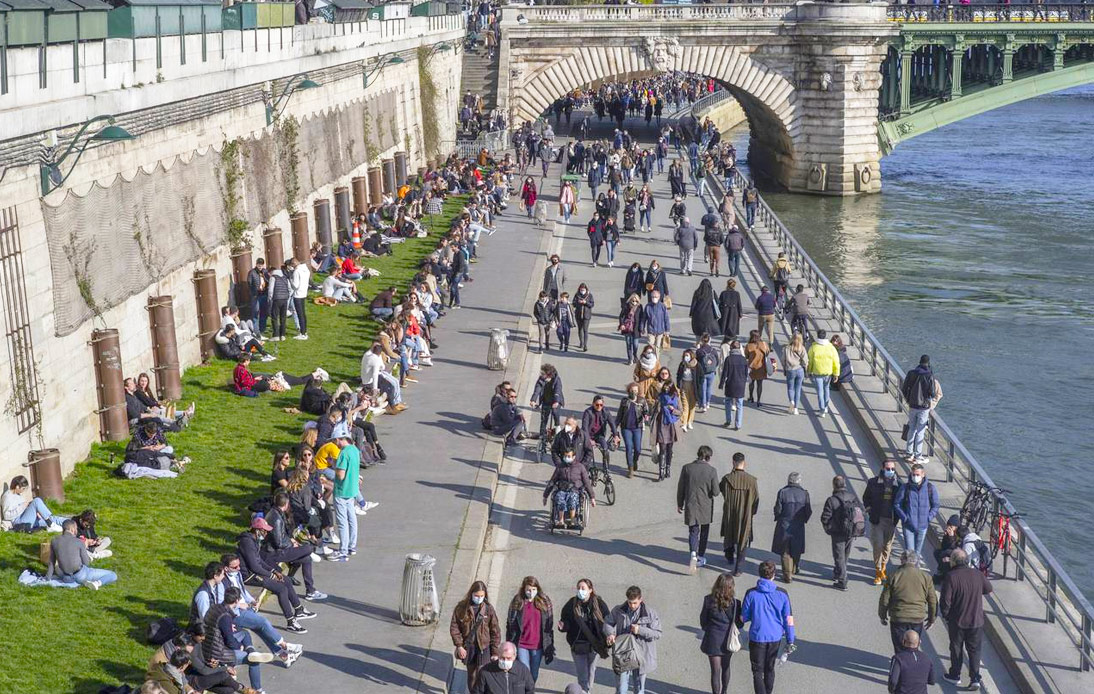 Parisians packed the streets and parks of the French capital over the weekend to enjoy the spring sunshine in rejection of the new COVID-19 restrictions and lockdown imposed again on the city.

He also said nonessential stores should remain closed as part of their efforts to prevent a third wave of coronavirus cases in the country. However, French President Emmanuel Macron undermined him.

Since then, Paris promenades and parks have been crowded.

But experts say crowds gathering could raise the case rate significantly. France logged 35,327 new infections on Saturday as the number of COVID-19 patients in intensive care units rose to 4,353, the Health Ministry reported.

It was the highest number of patients in ICUs so far this year.

Thousands of people demonstrated in Paris in opposition to the new lockdown measures. Furthermore, international media reported that citizens of other European countries took to the streets to protest against the restrictions – some of the nations were Germany, the Netherlands, Bulgaria, Switzerland, Austria, Poland, and Serbia.

In the southern city of Marseille, at least 6,500 people gathered to celebrate a lockdown-breaching street carnival.

The participants join the rest of the French protesters, saying that they are fed up with the restrictions and claiming that a third lockdown just a year after the first one was “a bit too much.”

But the measures were not only criticized by members of the public.

Experts and journalists have said that the measures were “messy” and did not go far enough to protect people. Under the new measures, people are not required to spend most of the day confined at home even though nonessential stores were closed.

Professor William Dab said that France had lost the battle against COVID-19, noting that the rate of infections was skyrocketing.

“There is a lag between the gravity of the situation, and the rules that have been adopted,” he said, adding that there has been a “divorce with science.” Professor William, who was in charge of France’s public health for two years until 2005, also criticized half-hearted lockdowns, conflicting advice on vaccines, and the lack of an efficient test-and-trace program.

“We can perhaps put the brakes on it a bit, but the epidemiological situation will not improve with the measures that have been taken,” he stated.