Crowds at Funeral of Killed Anti-Coup Protester in Myanmar 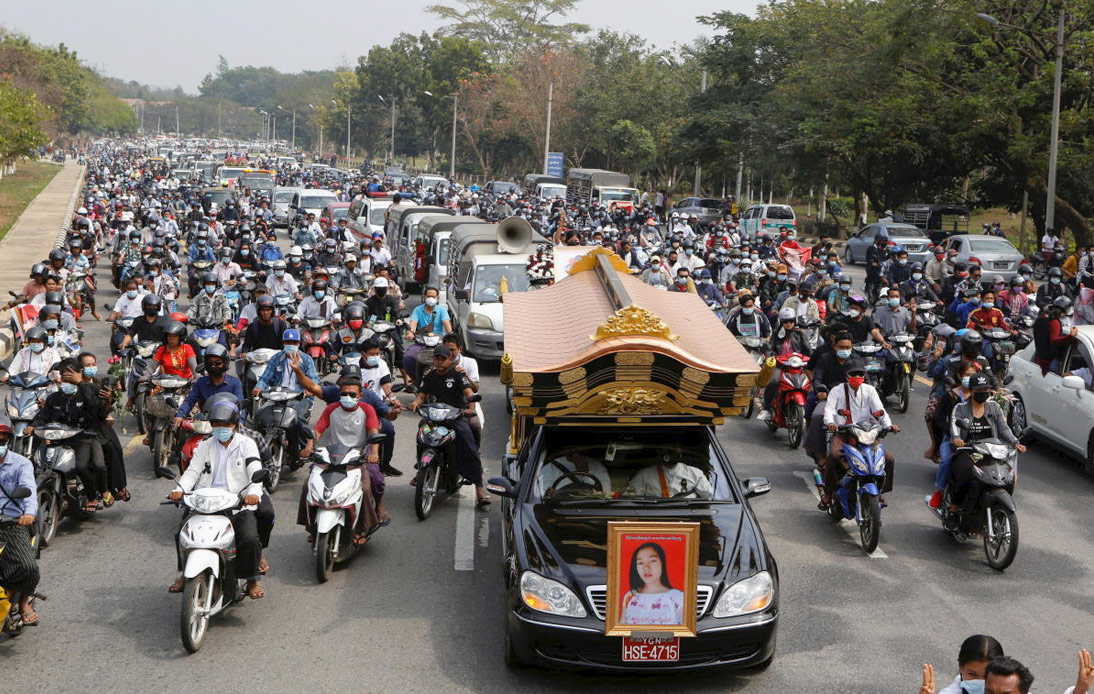 Thousands of people gathered in Myanmar’s capital Nay Pyi Taw on Sunday to mourn a young woman who died in recent protests against the military coup.

Mya Thwe Thwe Khaing, 19, was shot in the head.

The young woman, who was a supermarket worker, was injured earlier this month and was kept on life support for ten days. However, she died on Friday, becoming the first of at least three people who died during the protests against the military takeover.

Large crowds attended her funeral and lined the street to honor her, making the three-finger salute.

Attendees drove her coffin through the streets in a black and gold hearse, with a caravan of hundreds of motorcycles. Mya Thwe Thwe Khaing has become a symbol for protesters, who often display her image in rejection of the coup and repression.

Despite having seen the worst violence against demonstrators in weeks, Myanmar people took to the streets across the country again on Sunday.

The wife of prominent actor Lu Min said on Sunday that she had been arrested after posting a video denouncing the military leadership.

Why are Myanmar people rallying?

Myanmar residents have been protesting the February 1 military coup, where the military overthrew the democratically elected government.

The protesters have demanded the release of the elected leader San Suu Kyi and other members of her National League for Democracy (NLD) party, including the president. The army alleges that the NLD landslide victory in November 2020 was fraudulent.

However, it has not provided evidence.

Meanwhile, during the early hours of the day, monitoring group NetBlocks reported that Myanmar entered its second week of nightly internet outages. The military has ordered a regular blockade of the web to try to quell the mass protests.

Furthermore, Facebook recently took down a news site run by the military.

The said site was used to issue warnings to protesters and push forward their accusations of fraud regarding last year’s election results.

Both military leader Min Aung Hlaing and other senior army chiefs have already been banned from Facebook on allegations of human rights abuses against Rohingya Muslims.