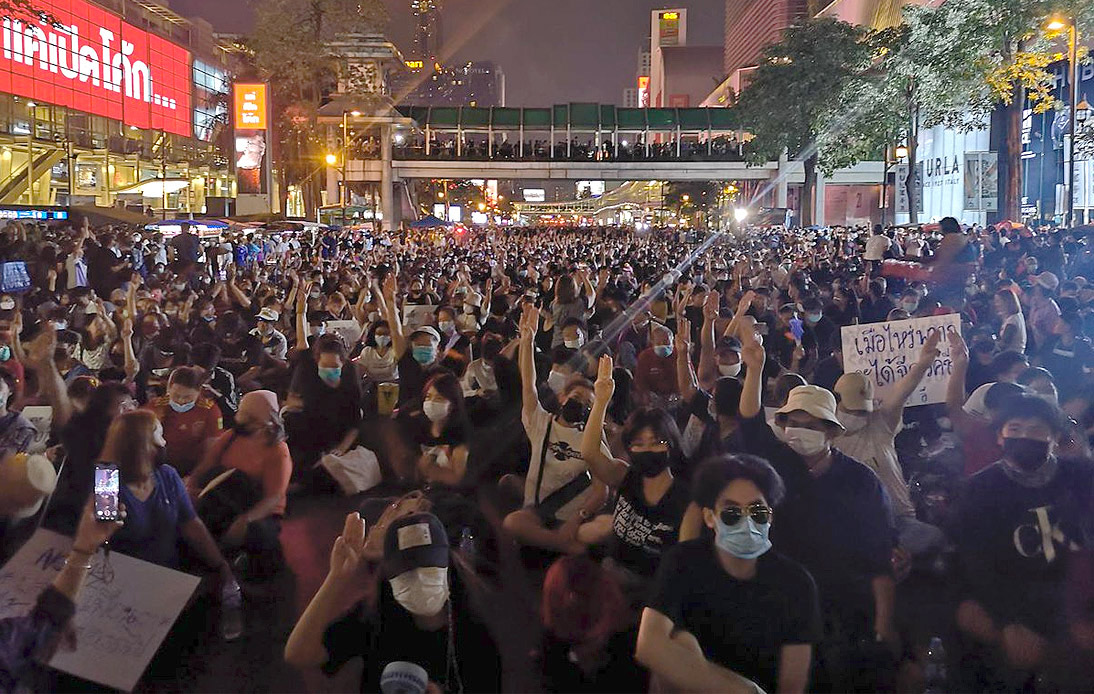 On Wednesday, thousands of protesters gathered at the Ratchaprasong intersection in Bangkok to demand the release of detained pro-democracy leaders and the monarchy’s reform.

The United Front of Thammasat and Demonstration posted a Facebook message earlier, asking the public and other activists to attend a peaceful demonstration just days after one of the most violent rallies since they started last year.

On Saturday, a clash at a protest near the palace left more than 30 civilians and police injured.

The gathering turned violent after police began using water cannons, rubber bullets, and tear gas to disperse the demonstration. Protesters were also calling for curbing the power of His Majesty the King and abolishing the strict lese majesty law that punishes anyone who insults the monarchy with up to 15 years in prison.

But the demonstration on Wednesday was peaceful.

Demonstrators gathered at Ratchaprasong, one of Bangkok’s busiest street intersections, while leaders of pro-democracy movements demanded monarchical reforms and the release of their fellows. However, the event remained calm.

Attapon Buapat, who was indicted for lese majesty earlier this month before being released on bail, said: “This is a long and tiring fight. We must fight together along this path to democracy. Change has begun. They could only slow it down but never stop it.”

The most prominent activists have been jailed and are awaiting trial for insulting the royalty. Another group of leaders, including Attapon, could be charged again on Thursday during a meeting with prosecutors about their role in the protests.

Thirteen pro-democracy protesters were called to appear at South Bangkok Criminal Court in a case based on a demonstration outside the German embassy in October.

They could face charges of lese majesty and sedition.

However, the prosecution could be delayed if the collection of evidence against the protesters has not been completed.

The Royal Palace has not commented directly on the protests, but the government has repeated that criticism of the king is illegal.