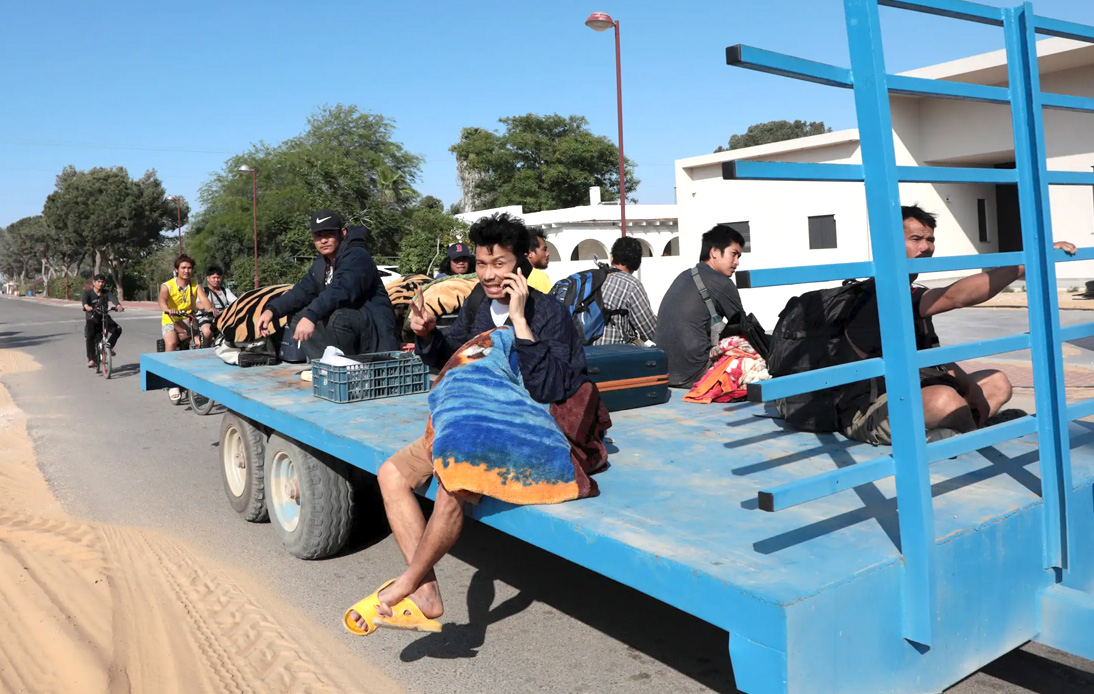 munities in Gaza and southern Israel were hit directly as Hamas fired rockets and mortars on Tuesday night, police said.

The two victims died at a packing factory in a community near the Gaza border, and both were in their 30s, the United Hatzalah volunteer rescue service said.

“In the last wave of rockets that landed in the Eshkol region, two people were killed,” police spokesman Micky Rosenfeld stated while confirming that the two foreign workers were from Thailand.

Yesterday’s events brought the death toll in the Jewish state to 12 since the conflict began last week. The strike also injured eight people, including one seriously and one moderately, said Magen David Adom, Israel’s equivalent of the Red Cross.

Police also said the casualties were treated, removed from the scene, and then taken to Soroka Hospital in the southern city of Beersheba while the area was under attack.

A week ago, officers also reported that a Thai citizen had been wounded by another rocket fired from Gaza. Besides, a farm worker was killed in the 2004 Israeli-Palestinian war.

Local government officials stated the foreigners were working in an area without proper fortifications.

“The impact was within a community without protection, which was not included in the fortification policy, and this is the terrible result we had today,” said Eshkol Regional Council head Gadi Yarkoni. He referred to a requirement to all communities near the Gaza border to have protection on buildings.

Current military restrictions indicate that businesses operating in the Eshkol area can only be open if they have easy access to a bomb shelter.

When asked why workers apparently did not have access or did not know how to enter such fortifications when air raid sirens blared throughout the region, an Eshkol spokesperson confirmed they did have access to a domed portable bomb shelter. The spokesperson stated that the matter was being investigated in order to find out what happened.

“They had a ‘bell’ shelter. I don’t yet know why they didn’t enter it,” the spokesperson said.